Negligent driving has been the cause of many fatal accidents on the Vhembe District’s roads, but when they are caused by the alleged reckless driving of emergency-services personnel, one cannot help but to cringe with concern.

On Saturday, 6 November, Ms Thambulo Francinah Mukoma was notified that relatives of hers had been in an accident along the R524 Road. She drove out to the scene of the accident and parked her Toyota bakkie next to a traffic officer’s vehicle on the opposite side of the road - a safe distance away from the road - under a tree. Her injured relatives had already been transported to the hospital. While she waited for the break-down services to arrive to take their damaged vehicle away, Mukoma sat on the back of her bakkie, speaking to the traffic officer who was at the scene of the accident. Suddenly, the officer yelled for her to watch out as a private ambulance came speeding directly at them.

The driver of the ambulance, who was heading towards Thohoyandou, was overtaking at high speed, but was faced with an oncoming car in front, so he swerved off the road to avoid a head-on collision and lost control of his vehicle. “I managed to jump over to the other side of the bakkie seconds before the ambulance smashed into my bakkie,” Mukoma said. Thankfully, no-one was hurt, but Mukoma has no insurance on her bakkie.

T Life Rescue is a private ambulance service provider. When the driver responsible for the accident phoned Mukoma that following Monday and requested the police report, she asked him for the owner of the company’s direct contact numbers, as she could not get hold of him on the landline. When she finally spoke to the owner – who would only communicate via WhatsApp - and asked him what he was going to do about the damage to her bakkie, he told her to send him the police report, which she did. After that, he requested three quotations for the repair of the bakkie, which she sent to him as well. He then told her that she had to submit the claim to his insurers, as the matter was not his responsibility. “This man is playing with me. He thinks that, just because I don’t have insurance on the bakkie, I don’t know how this works.” Mukoma saw that no amount of arguing with him was going to help and has since engaged with a lawyer to inform the owner of the correct procedures.

Mukoma is now not only left with the inconvenience of not having a vehicle to run her errands with, but also with more expenses to sort out the problem.

Limpopo Mirror spoke to a few fire brigade members, municipal ambulance drivers, as well as private ambulance drivers to determine what requirements are needed for emergency-service drivers. In essence, they are not above the law and specific rules and regulations apply to this category of drivers, even when they are rushing to save lives. 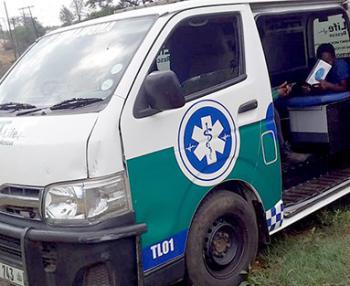