Sex workers from around the Vhembe District are complaining that their lives have been adversely affected when Munna Ndi Nnyi, an NGO that used to advocate for their rights and protect them from the law, lost their funding from the National Aids Convention of South Africa (NACOSA).

Bardwell Mufunwaini, the managing director of the NGO, said they had to shut down in 2019 because of non-funding. “I am willing to protect the sex workers’ rights, but at the moment we have no budget to speak of,” said Mufunwaini.

The NGO also provided the workers with information via peer educators located in different areas. The peer educators were responsible for distributing condoms and educating them on HIV/AIDS and other sexually transmitted diseases.

Limpopo Mirror recently spoke to a few sex workers from Louis Trichardt town. Most of them claimed that they were being deprived of their rights, arrested by police, and called names by their neighbours. Some were unhappy, since they no longer have access to certain information that is important in their line of work.

Mpho Ngovheni (31), who has been working in the sex industry since 2003, used to work on the streets but said that, since the organisation closed, she had not gone out to work. “I am afraid of being arrested by the police. You see, the police waste our time, and, in the process, we lose clients.” She further said that some of her clients did not pay what they used to pay before the outbreak of Covid-19 anymore. “Everyone claims that their salaries have been cut due to the suffering economy.”

On a good day, these workers used to earn around R500. This was before Covid-19. Now they earn only around R200 a day. Mpho says that, although this is not nearly enough to live on, she will take what she gets, as long as she is able to put some food on the table for her and her two children of nine and 15, who live with her.

Precious Mudau says that things have not been the same since Munna Ndi Nnyi closed. “When the organisation was still operational, the people who live in our area’s attitude had completely changed. Many people respected our work. The organisation used to be interviewed by radio stations and other media. This earned our work some form of respect.”

According to Mudau, most of the sex workers now find supporting themselves and their children difficult. Her three children live with relatives of hers in Beitbridge, where she is originally from.

But in spite of these workers’ hardships, Constable Irene Radzilani from the Makhado police says prostitution in South Africa is illegal and that enforcing the law was the police’s responsibility. Radzilani urges anyone with complaints about prostitution to report them to the police. 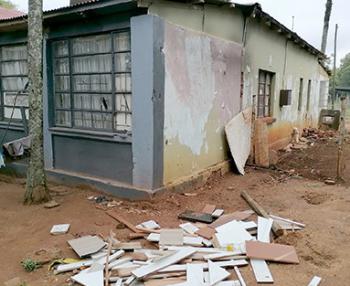 A number of sex workers from Louis Trichardt share this house in town. They complain that things have changed since Munna Ndi Nnyi, a non-government organisation, closed down due to lack of fundings. Photo: Bernard Chiguvare.