Leopard on the roam has Mtititi residents terrified

Residents of Mtititi village outside Malamulele, which borders the Kruger National Park (KNP), have been living in fear lately after recent incidents involving wild animals.

A week ago, a buffalo was sighted at the village. While the beast was being put down, one of the rangers accidentally shot and killed his colleague, leaving bystanders in an even worse state of shock.

On Sunday morning, 8 May, the community woke up to the news that a leopard on the prowl had caused havoc at a resident’s chicken coop in the village. The chickens belonged to local businessman Mr Phineas Bilankulu.

Mr Louis Masango, who is the caretaker at the chicken business, said that he heard noises outside that Saturday evening, but only saw the footprints of a leopard the next the morning. “I peeped through the small windows of the coop and saw the dead chickens. I also noticed that the footprints had not left the premises. Out of fear, I summoned the local rangers from the Kruger National Park, who responded swiftly. I asked them to bring their guns as I suspected that it [the leopard] was still inside the coop, but they did not take me seriously and said they wanted to inspect the place first. That was when the leopard made its escape. They fetched their guns and tried to shoot it, but it jumped over the fence and ran away,” he said.

That was not the last time the leopard would visit the family, though. Masango said the leopard returned the following day and ate some of the chickens it had killed the previous night. “Again I called the rangers, but they could not find it. The situation is terrifying because we do not know when it will strike again. It seems as if these animals have free movement to and from the park. Our lives are in danger and who knows, after finishing the chickens they might turn to humans. The sooner the park does something about it, the better,” he said anxiously.

Mr Bilankulu, who is the owner of the business, said the incident had impacted negatively on his business. “We spend a lot of money on feeds to grow these chickens. Imagine losing 250 chickens, which were almost ready for the market, in two nights. I do not even know what to do, but I am just hopeful the park will do something to compensate me. The loss is too much and has brought my business to its knees. My plea to the park is for them to keep their animals away from the people,” he said.

Limpopo Department of Economic Development, Environment and Tourism spokesperson Mr Zaid Kalla said the department was aware of the leopard at Mtititi. “Our officials were on the ground after receiving a report that a leopard had killed almost 200 chickens. They went there to investigate the report. [They] tracked the leopard, heading in the direction of the Kruger National Park. The department, together with communal members, will be monitoring the leopard’s activities and decide on the management action to be taken,” he said.

Kalla further confirmed that a runaway buffalo was also spotted in the area a week ago. “In an attempt to put down the animal, a fatal bullet accidentally went off and unintentionally hit one of the KNP field rangers. The incident happened when the buffalo was charging at the officials,” Kalla said.

The acting chief executive officer of South African National Parks (SANParks), Dumisani Dlamini, expressed his sadness and that of the entire organisation at the tragic loss of 36-year-old field ranger and dog handler Shando Mathebula, who died on 4 May.

The exact circumstances and cause of the death are under investigation by the South African Police and SANParks. 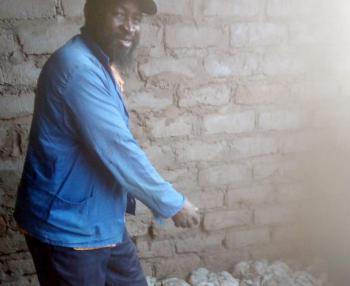 Mr Louis Masango from Mtititi village points at the dead chickens after a leopard got to them. Photo supplied.