Ncube defies the odds and becomes a goat stud farmer

While goat stud breeding is not exactly a common practice among young African farmers, Tsepo Ncube of Musina has taken a giant leap to venture into this terrain, despite not having formal training.

Ncube has never done any form of stock farming before, but his love of animals and determination to succeed in the unknown are the things that motivate him to try what other people think is too difficult.

“I want to challenge my fellow brothers and sisters out there. Anything is possible as long as one loves what he does. When I was doing my research, many people told me that stud breeding is not an easy thing, but I decided not to listen to them because I know what I am capable of. Even successful farmers started small like what I am doing, and I believe that one day I will be counted among the best in the country.”

Ncube always wanted to have his own farming business, but did not have enough money to start. “I saved what I could from the little I got from my printing and advertising business, and in February this year, I decided to start with stud breeding on a two-hectare piece of land in Campbell, Musina, where I have also drilled a borehole. To make things easier, I registered with the SA Boerboktelersvereniging (Boer Goat Breeders’ Society), so that I can also acquire more information from the people who have been in the industry for years.”

To date, Ncube has 18 breeding goats - 16 does (female) and two billy goats (male). “I bought the goats from registered stud breeders. Besides the 18 goats, I also have 10 indigenous goats, which totals 28 goats on my smallholding. I have demarcated six camps where I keep the stock according to their type.”

He has Boerbok, Red Kalahari, Savannah Gold and indigenous goats. One of his camps is a treatment area where he keeps the new stock for seven days to make sure they are cleared of any sickness before they are mixed with the other goats.

Ncube advises people not to give up on their dreams. “My target is to have at least 150 goats before the end of this year. I know I will achieve this goal because I have the capacity to do it and I believe in myself. The most important thing is to love what you do,” he said. 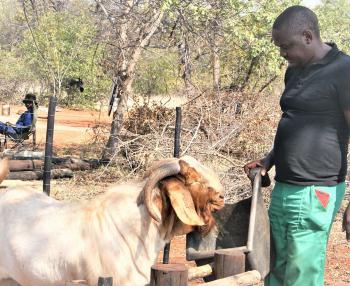 Aspiring stud breeder Tsepo Ncube with one of his breeder billy goats.