The province’s first botanical garden, and only the 11th one in the country, was officially launched in Thohoyandou on Sunday. The Thohoyandou National Botanical Garden will add some 82 hectares of land to the gardens managed by the SA National Biodiversity Institute (SANBI).

Sunday’s ceremony was attended by the Minister of Forestry, Fisheries and Environmental Affairs, Ms Barbara Creecy. She described the event as a milestone in conservation and community upliftment. “Conserving and restoring ecosystems, such as wetlands, rivers, and catchments, can reduce the disastrous impacts of extreme weather events, including floods and droughts,” she said.

The Thohoyandou garden is situated within the Vhembe Biosphere Reserve, the largest biosphere reserve in the country, which is home to several unique butterfly species, insects and threatened plant species. Of special importance, not just to conservation but to the local communities, are the various plant species that have important medicinal properties and value.

The land, which now falls under the conservation estate of the country, was part of a land claim lodged by the Mphaphuli and Tshiluvhi communities, who were forcefully removed from their land in the past. The communities agreed that the area could be used for such an initiative and were financially compensated for their land.

These communities will still have access to the ancestral gravesites and ruins, and a programme will be put in place to ensure that historical acknowledgement is done through the naming of structures in the garden. The garden will also include traditional designs adapted from the rich traditional knowledge of the Mphaphuli Community. The vision is that the garden will host workshops for traditional leaders and healers to raise awareness around sustainable harvesting of medicinal plants.

Minister Creecy said that local students would also benefit from educational programmes and, overall, the garden would create temporary job opportunities for the local communities.

“I would like to thank and appreciate the visionaries who saw it fit to establish an herbarium in 1976, and this area as a botanical garden. SANBI envisages that the plan for the Thohoyandou Garden will increase its educational value, financial viability and the interest and support of visitors, tourists, and the local community. We envisage the garden design where the choice of species represents multiple values of plants to the people, communicated in highly innovative, yet culturally appropriate, ways,” said SANBI Chairperson Prof Edward Nesamvuni.

He said that their vision was for the botanical garden to play its part in highlighting and promoting indigenous plants used for food, African arts, medicine, perfumes, traditional architecture, horticulture, and agriculture, and a garden that serves to increase the connection between people and biodiversity.

The infrastructure that the garden hosts will serve as a biodiversity centre for the province, showcasing traditional botanical garden features and scientific research facilities. As a nature-based, cultural and scientific tourism attraction, the garden will contribute to the socio-economic development of the area, supporting the surrounding communities, including the youth, students and local businesses. 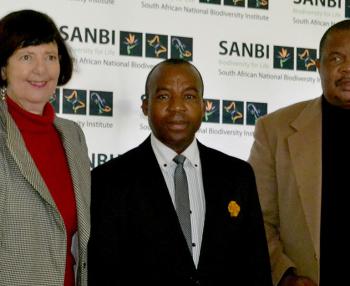