The state prosecutor at the Thohoyandou Magistrate’s Court, Ms Mashudu Nekhumbe, told the court on Monday, 30 May, that the delay in the murder case involving the two slain South African Municipal Workers Union (SAMWU) officials, Timpson Musetsho (50) and Ronald Mani (50), was because of the still outstanding ballistic results and comparisons of the firearms used by the suspects during the killings.

She was speaking during the appearance of the three Radzuma brothers, Percy, Simon and Ndivhuwo, and their co-accused, Thabo Sibanze, who stand accused of murdering the two SAMWU officials in 2019.

“We are only waiting for the police’s forensic laboratory, based at the South African Police Services (SAPS) headquarters in Pretoria, who told us that they had a large number of cases, including this one, that they needed to deal with. They said that, hopefully, they might get to our case by the end of July, but until then we will have to wait for them.”

Nekhumbe said that if the case could be postponed until 29 August, the police’s forensics team should have completed their investigation.

The defence’s advocate, Tshifhiwa Matodzi, however, argued that the case was taking too long. He suggested that the case be struck off the roll, as his clients’ funds were running dry while their cases were not moving forward.

Matodzi also said that his wish was that both State Prosecutor Nekhumbe and Magistrate Rendani Netshiunda recuse themselves from the case, so that his clients could receive a fair trial.

Magistrate Netshiunda postponed the matter raised by Matodzi, that both himself and Nekhumbe recuse themselves from the case, to Monday, 6 June, for judgment.

The accused remain in custody. 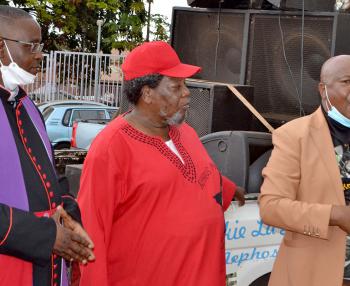 One of SAMWU’s leaders, Peter Muleya (right), spoke to the relatives and people who attended the case of two slain SAMWU officials outside the Thohoyandou Magistrate's Court on Monday, 30 May, while Dr Den Alunamutwe Rannditsheni (left) and Dean Simon Farisani (centre) listened. Photo: Silas Nduvheni.