Fears of ritual murder at Tshapasha

The remains of a cattle herder from Tshapasha village, who went missing earlier this year, were found in the rural mountainous village of Dzimauli-Tshapasha in Ha-Rammbuda in the Mutale area last week. His death and the circumstances surrounding it fuelled suspicion that this may have been a ritual murder.

Albert Tshililo Kwinda (43) had apparently already gone missing in February this year. He lived with his mother, Elisa, and brother, Hendrick Ndivhaleni Kwinda, in Tshapasha village. According to the deceased’s sister, Rendani Kwinda, who lives in another village, she officially reported him as missing on 5 May.

Last Friday (27th), a woman chopping wood in the mountain at Dzimauli-Tshapasha made the gruesome discovery. She immediately alerted the police who investigated.

According to the police spokesperson in Thohoyandou, Sgt Vuledzani Dathi, the bones and skull were lying in different places, and a blue rope had been tied to and dangling from a tree branch. The Mutale police have opened an inquest docket and the case is being investigated.

Hendrick Kwinda identified the clothes and cellphone that were found at the scene as those belonging to his brother, Albert. The remains were taken by the police’s pathology unit for further investigations, and a buccal swap was taken from Elisa (mother) for biological identification and to establish whether a match could be made.

After the discovery of the remains, villagers suspected that Albert’s death might have been related to a ritual murder, and they went berserk. Roads leading to the village were barricaded since the day the remains were discovered, and on Monday evening, 30 May, community members torched the three-room mud hut of a man who was last seen with the deceased.

The police were summoned yet again and are now monitoring the area to prevent further unrest and trouble.

The local traditional leader, Vhamusanda Nthatheni “Pharamela” Lambani, said that they were very disturbed by the matter. “Villagers suspect the act of ritual murder, as the suspect - the last person who was seen with the deceased - used to speak about him. That indicates that he might know something about the deceased. We have resolved to make the suspect leave the village peacefully, because if he stays, angry community members might take the law into their own hands and cause more trouble,” said Lambani. 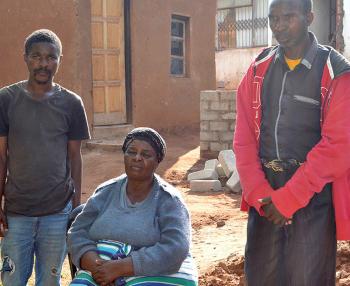 The distraught mother of the deceased, Tshililo Kwinda, who went missing in February this year, Ms Elisa Kwinda (seated), with Mukondeleli Kwinda, the younger brother of the deceased (standing on her left) and community leader of Dzimauli-Tshapasha, Mr Philemon Muluadzi (right). Photo: Silas Nduvheni.