'Pick up the spear against Eswatini,' says Mapaila

Mbedzi, known as “Messiah Thebe” in the MK camps outside the country, was detained in Eswatini in 2008, before being sentenced to 85 years in prison.

Mbedzi's younger brother, Rudzani Mbedzi, had some mourners shedding tears when he detailed how his brother was being tortured by the Eswatini government. He nearly broke into tears himself when he said his brother was shackled, tortured daily in Eswatini and was also treated the same way by the democratic South African government when he was transferred back to his land of birth to finish his sentence.

“He was always chained in Eswatini, and it was the same when he was brought back into the country. He also died in chains, and I can see members of the correctional services here, meaning we are burying him as a prisoner,” he said.

A very emotional Rudzani said when the family contacted some high-ranking government officials for help when asking the Eswatini government to release him, they told the family that they were not responsible for his going to Eswatini.

“Some of them are here. They told us in the face that they didn’t send my brother to Eswatini. We felt piercing pains in our hearts. It was a terrible experience for the family when we saw his former comrades abandoning him at such a crucial time in his life. Our government did not even help us with logistics when we visited him in Eswatini. Getting there was a nightmare,” he said.

Rudzani said when he saw him for the last time, his words were: “My view of freedom is not limited to border gates. I am not yet free if my fellow brothers and sisters are still oppressed. The route of liberation chose me, I will fight for my people selflessly.”

When addressing mourners, the first deputy secretary of the South African Communist Party (SACP), Mr Solly Mapaila, kicked off his speech by saying that the SACP blamed King Mswati for comrade Amos Mbedzi's death by denying him health care and ordering his cronies to torture him consistently.

“Dictators like King Mswati think they will remain in power forever. They will be caught and pay dearly for abusing and killing our people. There will be no reconciliation for murderers and despots in Eswatini,” he said.

“Mswati ordered that comrade Mbedzi should always be in shackles in Eswatini. He also gave the same order to the South African government, and they did exactly that. Our country should stop following diplomatic channels when dealing with dictators like King Mswati and send the army to topple him once and for all,” he said.

Most people were taken aback when Mapaila alleged that shortly before Mbedzi was convicted, Eswatini had advertised a post for a hangman. “His commander, the late Peter Dambuza, realised that the post was advertised in waiting for Amos Mbedzi's conviction, because Mswati wanted to hang him. He immediately went to Eswatini to urge activists to resist that decision and called for a referendum, which rejected such a decision for such a post. Because the judiciary is in his pocket in Eswatini, Mbedzi was sentenced to 85 years,” he said.

He called on members of the People's United Democratic Movement (Pudemo) who attended the funeral in big numbers, to strengthen its offensive struggle against Mswati until Eswatini is free. “Yes, the spear has fallen. But you have to dust yourself off and pick up the spear and fight,” he concluded. 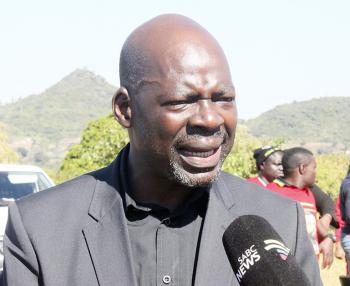