The scourge of illegal sand mining is leaving a path of destruction in the Vhembe area. Not only the environment gets destroyed by the illegal miners, but also the hopes and dreams of subsistence farmers in remote rural areas.

The illegal sand-mining activities have increased dramatically in the last few years, and many believe this is driven by organised crime syndicates, with contacts high up in government. The scale of the mining operations has also increased, with expensive machinery being used to remove the soil.

Fingers are also pointing at greedy traditional leaders who confiscate land, which then gets used to enrich themselves at the expense of the local people who use the land for subsistence farming. The market for sand for building purposes is quite lucrative, with a six-cubic-metre truck of sand easily earning its driver R1 200 or more.

One such community that has suffered from illegal sand mining activities is Tswera village. Tswera is situated about 25km north-east of Thohoyandou, near the Mutale River. The road leading to the village snakes into bushes from the main road between Thohoyandou and Makuya.

At first glance, one might think that the road is leading to patches of farming fields that are being used by the local people, but all that is history. What is left are big holes along the banks of the crocodile-infested Mutale River.

Where did it start?

The traditional leader of Tswera, Vhamusanda Fhedzisani Netswera, explained that the illegal sand-mining operations started very quickly and without his knowledge or consent.

“An elderly woman went missing in the village and a certain Ravhura from Makonde arrived with a group known as Tshiswole A Tshithabi, acting as if they were helping the family,” he said. The body of the woman was later found in nearby bushes.

Netswera is convinced that the offer of assistance was merely a scouting exercise, because not long after that, the same people were seen bringing in heavy machinery. The machinery is used for large-scale mining activities.

As a last resort, the community then enlisted the services of a lawyer. “This has cost us a lot of money, fighting people who were taking what belongs to us,” he said.

Going to court for help

On 15 December last year, the Tswera community approached the Limpopo High Court in Thohoyandou, asking for an interdict to stop the illegal mining activities. This application was uncontested and subsequently granted.

The mining activities, however, did not stop and the court was approached again on 30 December to force the police to act and arrest the people involved on contempt of court charges.

Two people, Simon Ramafamba and Nyadzeni Peter Ravhura from Makonde village, were subsequently arrested and had to start 12-month prison terms. The police were also ordered to confiscate the equipment used to illegally mine the sand.

The arrest of the two people seemed to have sparked action, because an appeal was filed against the 15 December ruling. On 4 January, the two men’s legal representatives also asked the court to release them from prison while the appeal is pending. The application for their release was dismissed with cost.

An appeal was then filed against the 30 December ruling that the two men should be taken to prison. On 18 February, acting judge Tshidada ordered their release from the Thohoyandou Prison, pending the outcome of their application for leave to appeal.

The fight to get the equipment and machinery used for the illegal sand mining is also continuing. One of the owners of the machinery used, a certain Mr Zwane Sihle from Midrand, Gauteng, claimed in an affidavit that the excavator that was confiscated had in fact been used without permission. The excavator was apparently rented out but taken without permission and used on the site at Tswera to mine the sand.

Some of the confiscated machinery was released amidst a lot of protestations from the Tswera community.

A path of destruction

Netswera said that the operations had since stopped, but they did not know what the illegal miners were planning. “These people caused so much destruction in our area. People have lost their fields, and it must be remembered that most of my subjects are unemployed and depend on farming for their livelihood, and their source of food has been completely destroyed,” he said.

“Future generations will judge us if we do not stand up and help preserve this environment. What is of concern to us is that the culprits were released from jail without reason. Even the confiscated machinery was released under mysterious circumstances. We need justice, and we want the culprits to pay for the damage they caused,” he said.

A pensioner from Tswera, Mr Tshidzulela Samuel Mulondo (73), who lost a three-hectare field, was close to tears. “I have never suffered this much in my whole life. We have owned this piece of land since 1972 and this has been a trusted source of food for the family. When I was still working, I would send money for it to be tilled, and when I retired in 2014, it became very useful as we could plant almost everything that we wanted. We never went hungry, but all this is now a dream and history. All that is left are big holes and water from the nearby Mutale River,” he said.

Mulondo said he now struggled to get a peaceful night’s sleep as the illegal miners had also followed him to his house and threatened him.

Another pensioner, Ms Modjadji Hlekani Chauke, said her field had been their main source of food since she had gotten married many years ago. “We planted vegetables and maize that we used here at home and some we sold to locals. I am helpless and feel like a piece of me has been taken away from me. The field has been part of my life, and without it I am nothing. All I wish for is that the culprits are punished for the pain they caused us,” she said. 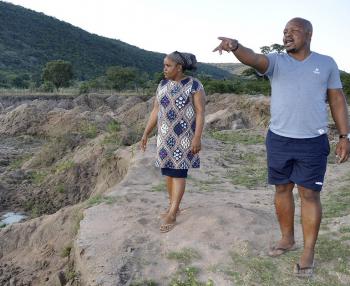