Entrances to Valdezia barricaded in protest of service delivery

Valdezia residents barricaded roads leading from Elim to Vuwani early on Monday morning (20 June) in protest against poor service delivery. The protesters demanded regular clean water and an end to power outages at their village. They also took issue with the poor condition of roads and infrastructure.

The roads were closed off with rocks and all sorts of rubble, and some of these obstacles were set alight to prevent motorists from passing. Hundreds of commuters were left stranded, leaving workers unable to get to work, while children were forced to walk many kilometres to and from school. Some schools in the area opted to rather close for the day and sent the children who had made it to school back home. Motorist had to use alternative routes.

A Valdezia task team member, Mr Vuhlari Mokoena, told the media that they had been interacting with the Makhado Local Municipality for a long time, but nothing fruitful had come of it. “We closed the road to raise our grievances with the municipality and government, so that they can begin to seriously attend to our issues. We are tired of the constant electricity interruptions and dangerous potholes in the roads.”

Mokoena said the community had had enough of empty promises from the Makhado Municipality regarding issues of service delivery. “We demand answers from the mayor [Samuel Munyai] in black and white. We are not going to fold our arms while things are not moving. Service delivery remains the core business of local government, coupled with addressing the concerns of communities in order to avoid protest marches like this,” he said.

One of the residents, Ms Hlamalani Manganyi, said the time had come for the municipality to take responsibility for all its residents. “We need our people to get services like other villages under the municipality, where residents pay for water and electricity.” Manganyi said she had to buy water from other community members who had drilled their own boreholes. “It becomes very costly to buy water every time. A 20-litre container of water is R5.”

The spokesperson for the Makhado Municipality, Mr Louis Bobodi, confirmed that the municipality had received a letter of grievances from the residents. He said that the management was busy looking at their demands and would respond soon. 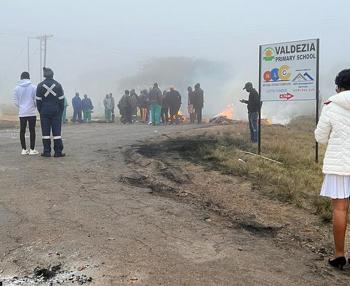 Commuters were left stranded when roads leading from Elim to Vuwani were closed off by angry protesters on Monday morning. Photo supplied.