'Do not sit and lament, make hay while the sun shines'

When the company Tshimangi Mathoni worked for was forced to close its doors a few years ago, she found herself without a job and a bleak future ahead of her. The outbreak of Covid-19 only added to her woes as she was confined to her house, like many others, with no money and nothing to do.

The 53-year-old mother of two from Tshisahulu Ha Mugumo was very frustrated as she helplessly watched everything collapse around her, and her own life going to waste with it. Yet, in a way, this was also a blessing in disguise as it gave her enough time for introspection, and during this period of reflection she came up with an idea to escape from poverty’s fierce grip.

With fingers crossed, Mathoni started tilling a small section of her yard and planted some vegetables, not yet realising that she was planting the seeds that would deliver a brighter future and economic freedom for herself and her family.

Her first crop turned out to be a huge success. Not only was it enough to feed her family comfortably, but she was also able to sell some of the produce to her neighbours. Today, she is an established farmer with even bigger ideas of expanding her farming enterprise.

“When I had lost my job a few years ago, I nearly gave up on life. It was only in 2020 that I decided to farm full time, and I have never looked back. I started very small, with only enough for my family, but then neighbours started coming to buy from me. Bit by bit I planted more, until my yard became too cramped, so I decided to ask for another piece of land in the church yard adjacent to my house. I plant nearly every type of vegetable, as well as mealies, and the demand keeps growing every day,” she said.

Besides her fresh vegetables, she also sells vegetable seeds to the locals, and the profit she generates from this enterprise now allows her to take care of her family’s needs. “If you have two hands, two legs and a brain, there is no excuse for not doing something to lift yourself up again. I am my own boss today and able to make a living without having to depend on others. My plan is to own a big farm one day. I do not regret the decision I made. In fact, I feel that I wasted my time working at the factory. To the women out there: I implore you not to sit and lament. Stand up and do something to turn your lives around. Our country has many opportunities that are waiting to be explored. Take advantage of it and make hay while the sun shines,” she said. 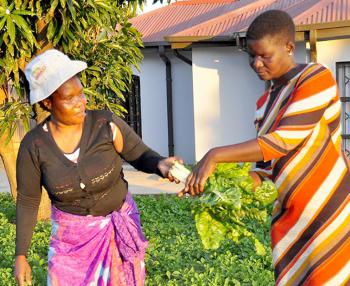