A delegation led by Chief Livhuwani Matsila visited the Director-General of the National Treasury in Pretoria last Friday to try and intervene in the Venda Pension Fund issue. Afterwards, all parties were apparently confident that this issue, which has been lingering for more than two decades, will soon be resolved to the benefit of all.

In 1993, roughly R800 million was paid out to members, but an equal amount was apparently reinvested with brokers and pension schemes. The former pension fund members believe that between R828 million and R1 billion of the funds was withheld during the amalgamation process. The withholding of funds was a result of the formulas used at the time to calculate payments, and possible maladministration.

For the next 26 years, different groups, representing the roughly 24 000 pensioners, tried to recover the “lost” millions. They were given hope when the former Public Protector, Thuli Madonsela, released a report in 2011 confirming the suspicion that National Treasury and the Government Employees Pension Fund (GPEF) had acted improperly when privatising the Venda Pension Fund.

When the new Public Protector, Adv Busisiwe Mkhwebane, took office renewed pressure was put on the government to give effect to the recommendations. The hopes of the pensioners were, however, dashed when the Minister of Finance indicated that he would ask the court to review the PP’s recommendations. This case is expected to be heard before the end of the year.

Chief Matsila decided to get involved personally in the matter and scheduled a meeting with the Director-General of the National Treasury, Mr Dondo Mogajane. He arranged with organisations representing the pensioners, such as the Dabalorivhuwa Patriotic Front (DPF), to be present at the meeting.

The decision of the National Treasury to take the report on review was not welcomed in many sectors of society. Chief Matsila also expressed his disappointment, saying that the government had acted in bad faith and instituted legal action against its own people, who are vulnerable and financially depressed.

Chief Matsila indicated that the National Treasury had finally made a commitment to enter into negotiations on this matter, irrespective of its pending court application. The newly comprised collective of the Venda Pension Fund has also requested the government to establish a joint task team to address concerns from all parties in pursuit of a speedy resolution of this matter, Matsila said.

Matsila had a lot of praise for Mr Dondo Mogajane, who went out of his way to meet with them. “Mr Mogajane's approach on this very delicate matter should be highly commended and supported because he is a very considerate, professional and progressive person. He is a director general of the modern-day era who is prepared to listen to helpless and destitute members of the community,” said Matsila.

Much optimism and positive speculation exist while pensioners await a response on the request for the government to withdraw its court application in favour of constructive engagements that would ensure that all the pensioners affected received their funds without further delays. “These delays are causing social havoc in communities as our people sleep hungry and children drop out of school, despite the fact that our parents and grandparents have worked under hard conditions to earn their pension funds,” Chief Matsila concluded. 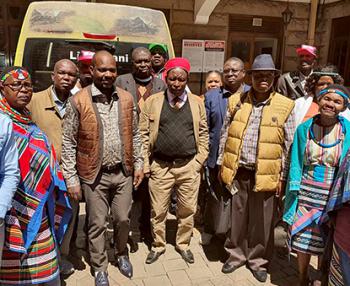 Chief Livhuwani Matsila and representatives of the pension fund bodies at National Treasury's office in Pretoria.