Hundreds of foreigners who stay in Louis Trichardt, Tshikota, Eltivillas and Elim received food parcels last week that were distributed by Vumbanani For Peace Building (VFP), a local non-profit organisation.

Upon realising that a lot of the foreigners do not receive food parcels from the Department of Social Development (DSD), volunteers from VFP compiled a list of needy families in the area. The list of possible recipients was compared with the records of DSD to ensure that no duplications occurred.

According to the Limpopo DSD, food parcels are only available for South Africans citizens and for foreigners who are in dire straits during the lockdown period. Foreigners who are legally in the country are advised to follow the same channels that locals go through.

Most of the foreigners make a living from doing casual jobs. During the lockdown period they are not supposed to go out in search of such jobs, and this has left many of them in distress. Many of the families are struggling to collect enough money to pay rent, which has caused tension as landlords demand payment.

According to Vicky Muvhali from VFP, the process of distributing the food parcels took a lot of planning. Those staying in the Elim area received the parcels at the Njakanjaka tribal office, while families staying in Louis Trichardt and Tshikota collected the food parcels in town.

The food parcels were donated by residents and businesspeople from Louis Trichardt.

The situation among some of the foreigners staying in the region are bordering on desperate. Two weeks ago, Limpopo Mirror was alerted of a group of seven Zimbabweans staying in a room at a house in Eltivillas. Their ages varied between 18 and 23 years. The electricity to the room has been disconnected since March, because they had failed to pay rent. The rent is R600 per month.

The seven young men were crammed into one dark room with two beds. At the entrance of their room is a fireplace. A small plastic bag full of firewood is by the side. At most they have one meal per day.

Bernard Gopole, one of the men, explained how he ended up in Eltivillas. “After writing matric in Zimbabwe in 2014, I decided to come to South Africa. The economic situation back home is bad, and I could not sit down and watch family members struggle,” he said. Since 2015 he has stayed here, not even going back to find out what his matric results were.

Phineas Ganyire (18) said that his parents had died when he was still at a tender age. Because of his excellent performance in sporting activities, he was awarded a scholarship. After finishing Grade 10 in Zimbabwe last year, he came to South Africa in January this year. “I wished to go back for my results, but due to the lockdown I can no longer travel. In addition, I no longer have any money,” said Ganyire. 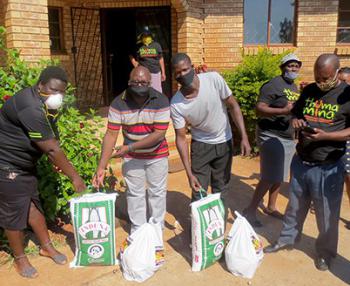 Photographed at the Njakanjaka tribal office are, from left to right, Martha Baloyi, Chief Samuel Mukhari and Vumbanani For Peace Building members.