A new house for Mudzweda family

A resident of Miluwani village, Ms Fhumulani Mudzweda, has every reason to rejoice. Her days of staying in a one-room corrugated-iron house are over, thanks to a donation from the Magoma Foundation.

The foundation is known for donating sanitary towels to girls and clothing for needy babies, but this time around they went big by donating a house to Ms Fhumulani Mudzweda’s family last Thursday. According to the founder-member of the foundation, Mr Tshifhiwa Magoma, it all started last month when his team was distributing food parcels to needy families around the Vhembe District. Magoma said that when they arrived at Ms Mudzweda’s family home, what became clear to everyone was that the family needed much more than just a food parcel.

Mudzweda was sharing a dilapidated one-room house built of corrugated iron with her three children, Thendo (10), Fhulufhelo (7) and Mulalo (6). The heart-breaking sight prompted Magoma to go all out in soliciting donations to address Mudzweda’s bad situation. The response was overwhelming. According to Magoma, he received building material and enough cash to build a house for the family within a short space of time.

When handing the keys over to Ms Mudzweda, Magoma revealed that the project was a success because of the donations his foundation had received from companies and individuals, including Ntasa Technical Services, and Supply, Crobie Events, Thohoyandou Adventures, Vhafamadi Funeral Undertakers, Maungani Lodge and KMA Logistics and Transport.

Mudzweda shed tears of joy as she received the keys to the house. She revealed that the situation in which she had found herself over the years had been traumatizing her children. She said she remembered one day when her first-born child, Thendo, had brought home three of her schoolmates after school. According to her, the schoolmates discussed her daughter’s situation with friends at school and Thendo became a big joke to everyone.

She further stated that the girl had refused to go to school for some days until she had personally taken her to school and discussed the matter with the school principal, who had warned the children about their unbecoming conduct. Mudzweda said that she used to do some odd jobs for neighbours to supplement the child support grant for the three children. She sadly revealed that the neighbours for whom she used to do the odd jobs had told her not to report for work, saying they did not have cash to compensate her because of the national lockdown. 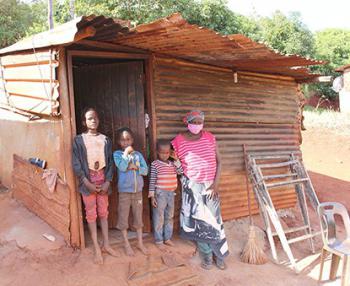 Ms Fhumulani Mudzweda and her three children pose for a photo in front of what has been their shelter for the past 12 years.