Things are changing at Ridgeway on many levels

Things are changing at the Ridgeway schools in Louis Trichardt on many levels as part of their 21st birthday celebrations.

“This year has been a strange and disrupted one, with so many plans being scuppered. We have to believe that this will pass and plan for a future beyond 2020. Part of this planning lies in the rebranding of our schools,” said Dionne Redfern, executive head of Ridgeway College, Ridgeway Preparatory (prep) and the Ridgeway Early Childhood Development (ECD) Centre.

Redfern said that turning 21 held special significance. “It’s regarded as a ‘coming of age’ birthday and celebrates a sense of independence and selfhood. Our school turns 21 this year and it seemed an appropriate time to reassess our family of schools, our values and identity and our offering in the 21st century,” said Redfern.

Until now, each school has had a separate school badge. “This year, as we considered the consolidation of our ECD, preparatory and college under one banner, so to speak, it made sense to have one badge for all of us, showing the unity and commonality of the vision we share. Mindful of the cost to parents and taking stock of what we already had that we wished to keep, we settled on the Prep badge, with a few changes,” said Redfern.

The Prep school badge contains key symbols that will remain unchanged. The clear blue sky and verdant green are typical of this warm climate and beautiful setting in the foothills of the magnificent Soutpansberg. Typical, too, are the majestic baobab trees that stand as firm sentinels of strength and beauty in the landscape. A hand holding a quill, symbolic of education, remains in the foreground, but the quill has changed to gold, as has the banner to enhance the new uniform. Ridgeway’s motto will remain the same: Believe in yourself.

“It is a simple, sincere statement that encapsulates all that we hope to instil in our learners: a sense of self, of their place in the world, and the power to attain their dreams. We are blessed to have our schools in such a lovely space where our learners can be “free range”; where they can grow into adulthood in a place that is natural, harmonious, uncomplicated, and clean,” said Redfern.

As for uniforms, Ridgeway Prep has always had a uniform, whereas the college began with no uniform at all and then moved to jeans and golf shirts. “We believe that wearing a uniform is a badge of pride, helping to create an identity for a school and, for the student, a sense of belonging. We will retain much of the Prep uniform but will make changes, such as girls will wear skorts rather than skirts in the Prep, and replacing the blue skirt with a fabric of blue and white tweed, with a fine thread of yellow-gold,” said Redfern. 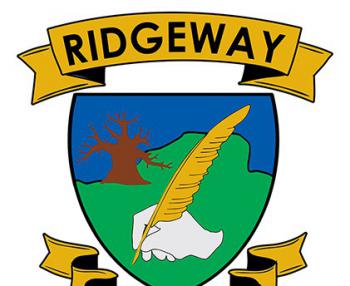 The proposed new combined Ridgeway badge as part of a process of re-branding the Ridgeway schools in Louis Trichardt. Image supplied.