Even though the R350 Covid-19 Social Relief of Distress (SRD) grant is welcomed by many South Africans, collecting it at some of the post office branches in rural areas seems to be a challenge for many.

On Friday, 13 November, Limpopo Mirror witnessed a snaking queue at the Louis Trichardt Post Office. The queue started at the post office in Krogh Street, meandered into Erasmus Street and ended up almost a kilometre further in Burger Street.

Limpopo Mirror spoke to a few of the people waiting in the queue to find out why they were waiting. What became apparent soon was that most of the people were from areas outside town. “We are always told the machines (in our area) are down. Come tomorrow for the money, they tell us. The following day, they serve only a few people and then close, ignoring people who have been waiting patiently for their money from 05:00,” said Richard Ryce (21) from Mara.

This is the third time Ryce has travelled all the way from Mara to Makhado Post Office to collect his Covid-19 SRD. Like many others in the queue, he reckons the service in Louis Trichardt is much better than what they experience in the rural areas.

It costs him R50 every time he travels back and forth. On Friday, he was at the post office by 06:30, but the queue was already stretching into Erasmus Street. “I’m sure I will be served before the end of the day,” he said.

Two Grade 12 learners, who usually collect their Covid-19 SRD at Nzhelele Post Office, claimed that the service at that post office was just as slow.

Doreen Makoro, who travelled from Soekmekaar, said her transport to Louis Trichardt and back cost her R70. She was at the post office by 04:00. “It is now 08:00 and I have not had a meal, but I am very confident that I will be served,” said Makoro optimistically. She was only a couple of metres away from the post office’s entrance by then.

In response to our enquiry, the post office’s regional manager, Kipcher Nkosi, told Limpopo Mirror that some of the post offices were manned by only one or two tellers, who might not be able to cope with the number of people queueing up for that day. “We cannot employ more tellers as SRD is a temporary situation.” He also said that some of the beneficiaries made their work difficult for them when, at times, they could not be controlled, and so the tellers delayed assisting them. 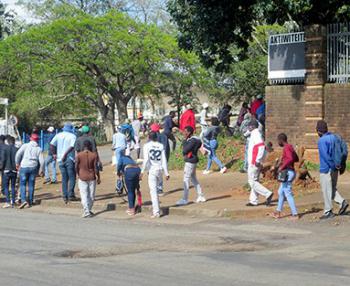 On Friday, the queue in front of the Makhado Post Office strecthed all the way to Burger Street. According to beneficiaries who came to collect their Covid-19 SRD, the queue was long, but the service was much better than at post offices in rural areas.