Local cartoonist uses his art to express his views

Fhatuwani “Fhatu” Muladi, a cartoonist from Louis Trichardt, has an exceptional way of expressing his views on the current social, economic, and political affairs in South African.

Keeping up with the world around him, this talented artist draws cartoons on various topical matters that he portrays in a comical manner that people understand and can relate to.

“Drawing cartoons has been my passion since my primary school days,” said Fhatu, who had obtained a diploma in Graphic Design from Tshwane University of Technology. He believes that cartoon making plays an important role, as he can use this art form to evoke emotions and create further debate on societal matters. “My cartoons are mostly based on trending events, especially politics and other major happenings in the media,” he said.

When asked if he had any personal views on the recent looting incidents in Gauteng and KZN, Fhatu replied: “I am against the looting that took place in our country, as it had a very negative impact on our economy. As a result, many businesses have closed, and many people have lost their jobs.”

His clients include individuals interested in digital art, as well as businesses, since he also does graphic design. “I think my art has proved to be viable because of its relevance,” he said. 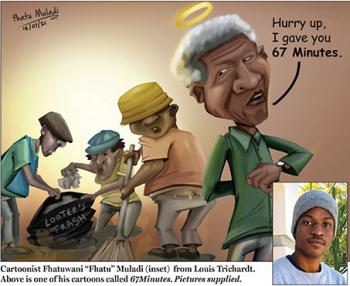