Help us get rid of terrible stench, plead residents

“We have been complaining about this problem for the past ten years, to no avail. Now that the newly elected mayor is personally here to see for himself, we are hopeful that there will be a permanent solution to it.” These were the words of Ntuweleni Madamalala, a concerned community member from Matswale in Musina’s Ward 2, during Musina Mayor Nkhanedzeni Godfrey Mawela’s visit to the area.

The area suffers a serious problem with frequent sewage spillages from overflowing manholes that flow into the municipal storm-water-drainage channel. The combination of this spillage and rubbish that is being littered into the storm-water channel slows the flow down, resulting in blockages and huge pools of water mixed with sewage. Residents fear that this not only puts everyone’s health at risk, but also the environment at large.

Madamalala pleaded with their new leader to do something about this problem. “It is a very serious health risk to us because it is a breeding site for mosquitos and a source for water-borne diseases. The bad smell is horrible and makes our lives very miserable. We humbly request you to come to our rescue to alleviate this health risk.”

The newly elected local ward councillor, David Mokobi, said that the area had been added to his priority list. He took up his position as political leader last week. “I engaged the mayor, and he made the time to come and see for himself what the local people are crying about.”

Mayor Mawela said that, as a leader, he did not want to depend on written reports sent to his office; he wants to personally go out and look at the actual situation. “Indeed, the situation is very bad because there are people who live around here.  When our council took over last week, we committed to doing everything possible to bring a better life for all. I am going to engage all relevant stakeholders, so that we can quickly get a solution to this problem,” he promised. 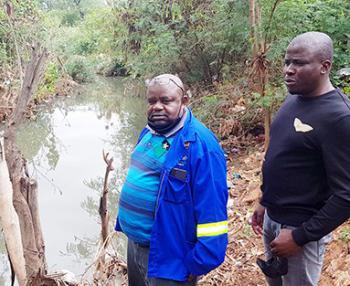 Musina Mayor Nkhanedzeni Godfrey Mawela (right) and local ward councillor David Mokobi at the blocked storm-water channel in Matswale. Mawela has promised to make sure the problem gets solved as soon as possible.