Local man in court over illegal guns, ammunition and assault

A local farmer, Wayne Roper (59) of 528 Misty Heights, appeared in the Louis Trichardt magistrate court on 5 January 2022 on charges of verbal assault, malicious damage to property, and the illegal possession of firearms and ammunition.

On 3 January this year, the police received information from one of the members of the Farm Watch about a shooting incident on Roper’s farm and rushed to the scene. On arrival, the police were informed that Roper had allegedly threatened one of the occupants on the farm and subsequently shot at his motor vehicle, damaging it.

Roper was arrested and five firearms and a total of 401 rounds of ammunition of different calibres were recovered. After further investigations conducted by the police, four more firearms and an undisclosed amount of ammunition were discovered. They were all confiscated and will be taken for ballistic examination.

Roper was initially expected to appear in court on 4 January, but due to his alleged violent behaviour, he only appeared a day later. He was remanded in police custody until 12 January but, according to a court official, Roper tore off all his clothes before he was to re-appear and taking him into court naked was impossible. The court still awaits a psychiatric report.

Roper again appeared in court on 19 January. His case was again postponed, this time until 26 January while the court waits for his mental evaluation report. 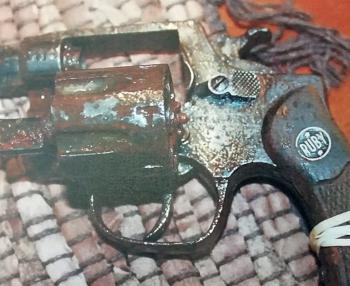 One of the firearms recovered by the police on Wayne Roper's farm in the Louis Trichardt area. Photo: supplied.