The Masakona Communal Property Association (CPA) says that the partnership with Vumelana Advisory Fund is finally starting to bear fruit as the farm switches into productive gear.

The Masakona CPA represents one of the Luvuvhu River Valley communities who were forcibly removed by the then Apartheid government between 1920 and 1930. They were relocated about 50km from their original settlement. In 2005, the Masakona community successfully reclaimed 860 ha of land, valued at R47.8 million. Some 270 ha of the reclaimed land is being leased under title deeds, with 189 ha that have been developed.

Today, the CPA is engaged in banana and avocado farming. With the necessary expertise, they are even prepared to go into macadamia farming.

Between 2005 and 2017, the CPA entered into a partnership with SAFM and Sharp Move Trading 150 (Pty) Ltd, but this was a short-lived marriage. Realising that it delivered no meaningful production, the CPA and Sharp Move Trading 150 (Pty) reached a point of seeking private investment. Consultations with the Limpopo Department of Agriculture resulted in the CPA’s being referred to the Vumelana Advisory Fund for possible assistance.

Vumelana Advisory Fund is a non-profit organization that helps communities in land-reform programmes to develop their land by funding advisory services to structure commercially viable partnerships between CPAs and investors that create jobs, income and skills.

In 2019, through the professional expertise of Vumelana, LEFT Futures (PTY) Ltd was selected as the transaction advisory firm, and in December that same year, the Masakona Agricultural Development Project commenced.

The CPA’s members say that they could not be happier with this partnership with Vumelana Advisory Fund as they are now making real progress towards running a productive CPA. “For the moment, we are concentrating on banana farming until we are able to get assistance to get to full-blown production. Although we do not have a very strong market for the bananas at the moment, we believe that the introduction of the Vumelana Advisory Fund into the CPA will take us to another level,” said Amelia Mukwevho, deputy chairperson of the CPA.

They have 17 employees working on the farms at the moment. 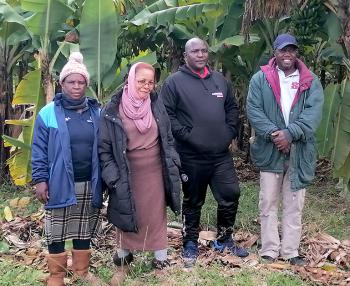