The dreams of Black Leopards fans to watch their favourite team play their home matches in the ABSA Premiership at the Thohoyandou stadium have been shattered, at least for now.

After inspecting the Thohoyandou Stadium last Wednesday, the Premier Soccer League’s chief operational officer, Professor Ronnie Schloss, had to make a final decision. On Thursday he announced that the stadium was not suitable for PSL games.

Schloss visited Thohoyandou last Wednesday with other PSL officials to assess the stadium. The newly promoted Black Leopards have registered the stadium as their home ground. Leopards were supposed to host the Limpopo derby against Polokwane City here on Saturday, but the match was moved to the Peter Mokaba Stadium in Polokwane.

Many soccer lovers from around Vhembe were left stranded after buying tickets indicating that the match would be played at Thohoyandou Stadium. The supporters, who filled the Thohoyandou stadium to watch Leopards while playing in the National First Division, had to travel 200 kilometres to Polokwane to attend Saturday’s match.

Leopards have announced that they will be taking the decision of the PSL to have them play their home matches in Polokwane to arbitration.

Schloss said that Thohoyandou Stadium's suitability for Premier League clashes would be re-assessed after the construction work was finished. “They have put up floodlights now, (but) there are certain minimum requirements that they have got to sort out, and I'm sure they can be (sorted out). But the PSL committee will have to look at it to ensure that it meets all the minimum requirements. The pitch is acceptable, those were problems in the past, and now it's just a couple of safety items that need attention with regards to entry and exit. And I'm sure that if all these requirements are complied with there will be no problem,” he said.

Schloss said that the most important concern was the safety of the spectators. He recommended the construction of three more gates, including one for people with disabilities.

Leopard’s spokesperson, Berry Ramunenyiwa, said that they were anticipating a positive report from the PSL. He said that other documents would also have to be forwarded to the PSL. He was very positive about the outcome and believed that they would play the remaining matches at Thohoyandou Stadium.

Thulamela Local Municipality’s spokesperson, Mr Ndwamato Tshiila, said that they had tried to revamp the stadium to enable it to host PSL games. “We have tried by all means to resolve the outstanding issues since we have been given the instruction by the PSL, but we hope that the remaining matches will be played here. We should have done that before. We were having some budget constraints, but right now we have tried to budget in a way that in two months’ time you will see that there will be a very serious development.” 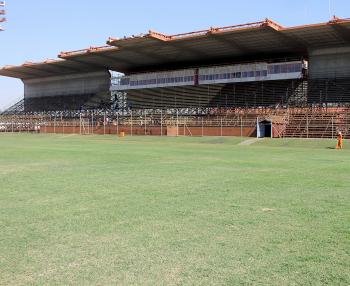 The Thohoyandou Stadium is still under construction.