A night to remember for Leopards

Bidvest Wits gave Black Leopards a night to remember and narrowly beat them 0-1 in their Absa Premiership League match at the Thohoyandou Stadium on Saturday evening.

The absence of Leopards’ regular players, Phathutshedzo Nange, Tumelo Khutlang and Joseph Mhlongo, was evident from the onset.

Lidoda Duvha did not lose their fighting spirit, even though two of their defenders, Marks Munyai and Chris Katjiukua, were warned with yellow cards within the first 10 minutes of the game. As if they were leading, Black Leopards played defensive football for the better part of the first half and relied on counter-attacks.

That prompted the Wits coach, Mr Gavin Hunt, to move two of their defenders forward to increase the amount of pressure on the Leopards’ defence. The scoreboard was still blank when the referee blew the half-time whistle, despite numerous attempts by the visitors.

Mr Morgan Shivambu, Leopards’ caretaker coach, was forced to effect change to his starting line-up earlier in the last half. Their left winger, Xolani Ndlovu, fell after colliding head-on with Deon Hotto and sustaining head injuries. He was taken off the pitch on a stretcher and was ultimately replaced with Lifa Hlongwane.

Thembisani Nevhulamba, the Leopards’ centre forward, missed a fortune in the 67th minute. His close-range header missed the target by inches.

Wits effected two changes to their original line-up late in the game. Simon Murray and Gift Motupa were replaced with Gabadinho Mhlango and Lehlohonolo Majoro respectively. The goal that earned Wits three significant points came in the 84th minute. Gabadinho Mhlango headed home after a square pass from Elias Pelembe. 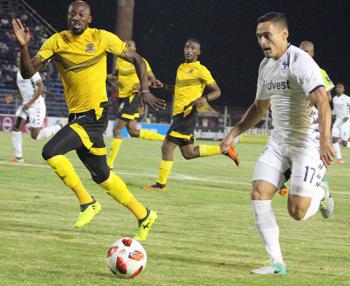 Jean Munganga of Leopards (left) and Simon Murray of Wits chase the ball.