Magau too strong for Aces

The match was war in the true sense of the word. At first Aces were threatening to find the net, but things changed as the game approached the halfway mark of the first stanza. Ellan Ratapa, Aces' left flank, had his chance after receiving a brilliant pass from John Mavula. He shot aimlessly from close range and the ball went wide.

Defenders took 22 minutes to stamp their authority on the game. Their overlapping midfielder, Rendani Tshikumbane, capitalized on a defensive error by Aces' defenders and blasted in a rocket from close range. The keeper of Aces, Unarine Kutama, watched helplessly as the ball crossed the goal line.

Khodani Masia of Aces should have equalised after receiving a neat pass from Khumbelo Matshisevhe within the box and unleashing a half volley. The shot did not give the United keeper, Brutas Likunyane, any headaches as the ball did not have enough power behind itl.

The half-time score was still one-nil in favour of United.

In the second half, Aces had nobody else but themselves to blame for the defeat. They squandered countless scoring opportunities throughout the game. Ndaedzo Mamafha was tightly marked and could not play his normal attacking game. Realizing that life was difficult for him as a striker, Mamafha moved back and played as a midfielder. 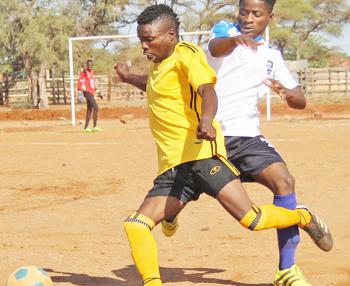 Collen Ratapa of Aces attacks, while Rendani Tshikumbane is ready to intercept.