MML and Rainbow in draw

The local derby in the form of the MMK Administrators League match between Rainbow Academy and MML at Kutama on Sunday ended in a 1-all draw.

Rainbow had an opportunity for a goal in the opening minutes, but Mashudu Sirunwa shot into the hands of the keeper, Karabo Makhwathani. MML’s misfortune continued in the ninth minute, when Tsumbedzo Madi shot over the bar with only the keeper to beat.

In the 12th minute, Mpho Tshabalala of Rainbow´s well-timed shot missed the poles by a mere inch. Godfrey Kobe of MML dribbled past several defenders and scored in the 15th minute. Nndwamato Netshaulu of Rainbow equalised after he received a square ball from Thikhathali Musekwa in the 38th minute. The score was 1-1 when the referee blew the whistle for the break.

MML started the second half at a very fast pace, giving their opponents no moment to breathe. Rainbow should have scored in the 60th minute, but their striker, Charles Ramalata, hesitated for too long and a defender of the opposition sent the ball out.

MML should have scored in 78th minute, but Fhumulani Tshivhula’s shot hit the crossbar and bounced back into the field of play. Karabo Makgwathana, the keeper of MML, saved a sure goal from the boot of Derrick Makhubele at the end of the match. 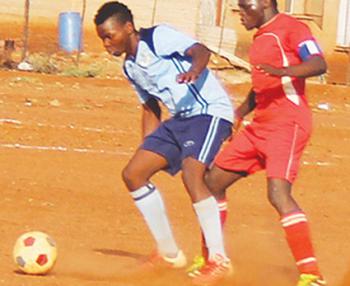