Ugly weekend for the junior Leopards

While the main team is still coming to terms with the 0-3 defeat they suffered at the hands of Bloemfontein Celtic on Sunday, Leopards’ Multichoice Diski Challenge side was brutally walloped 0-5 by Polokwane City at the Thohoyandou Stadium earlier that day.

With only one match remaining before they wrap up their league programme, the Diski Leopards know that they need a miracle to move from the bottom of the log. The Thohoyandou only have six points and the only time the Diski Leopards tasted victory was when they beat Highlands Park 4-1 at the Makhulong Stadium in Thembisa last month.

The game against Polokwane City was one-way traffic, with the young Leopards at the receiving end. The visitors took the lead in the 20th minute. Their lethal striker, Lesiba Nku, finished off a square pass from Banele Sikhonde. City increased the margin in the 38th minute. Banele Sikhonde blasted in a rocket from inside the box after beating the Leopards’ keeper, Nndweleni Mothwari, to bring the half-time score to 2-0.

The only replacement Leopards made was when they introduced Sihle Chabalala and sacrificed Lazarus Maloka.

Lehlohonolo Mohlabai forced his way through the defence of Leopards and registered his team’s third goal with a ground cutter. Andile Nkosi, who came on as a substitute for Bantu Chingi in the 68th minute, was on target with a half volley two minutes after his introduction. Their fifth goal came via Eethe Khaukanani late in the game. 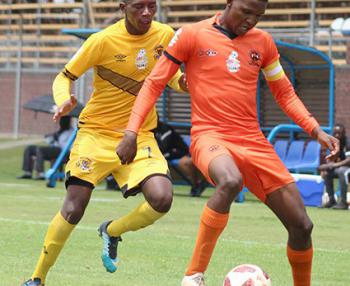 Kenneth Nthangeni of City hinders Xolani Ndlovu of Leopards from reaching the ball.