Eagles too strong for TTM

TTM’s caretaker coach, Mr Phuti Mohafe, might be seeing things differently, but chances are fast becoming slim for Tshakhuma Tsha Madzivhandila to partake in the promotional playoffs at the end of the season, let alone gain automatic promotion to the elite division.

This after they donated league points to Royal Eagles in their National First Division League match at the Thohoyandou Stadium on Saturday.

Speaking to journalists after the game, Mohafe said that losing against Eagles had not made them lose their focus. He stated that the club’s future could not be determined by a single league match. “Yes, we have lost the match, but our primary focus is to take part in the promotional play-offs if we fail to gain automatic promotion,” he said.

Asked where he thought they had lost the game, Mr Mohafe indicated that his team had played good football except that they had failed to convert the chances they had created. According to him, Royal Eagles were not dangerous in their attack, saying they were just lucky to catch TTM napping from their counter-attacks.

Mohafe’s Royal Eagles counterpart, Mr Sazi Ngubane, said that a win away from home was the most precious gift his players had ever given him. He unreservedly admitted that TTM were by far the better side on the day, saying that playing entertaining football without scoring was a useless exercise.

The visitors from Pietermaritzburg took the lead in the 15th minute. Tshepo Makgoga, TTM’s right back, committed a clearing error in the 15th minute and Strydom Wambi, who was waiting close by, said thank you very much.

TTM used all their substitution chances in the last half. They replaced Tefo Mokoena, Edward Maqele and Ndabayithethwa Ndlondlo with Aluwani Nedzamba, Wonderboy Makhubu and Joseph Kamwendo respectively. The move was not good enough to stop Royal Eagles from increasing the margin through Neliswa Lungwase in the 78th minute. 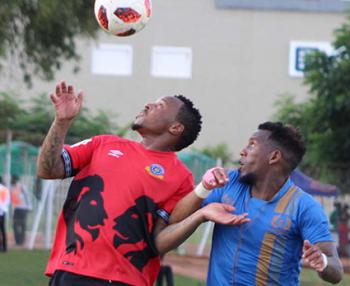 Edward Maqele of TTM (left) and Diego Brown of Eagles are focused on the high ball.