Victory for TRON against Barrach Valley

After struggling to collect full points in their previous matches, Tshakhuma RO Na Ndilani (TRON) made a comeback and registered a narrow 1-0 victory over Baraccah Valley in their ABC Motsepe League match at the Tshisahulu Mmbengeni Kone grounds on Sunday.

The game was one of two halves as Baraccah enjoyed ball possession in the first 45 minutes while the home side took the game to the visitors in the last stanza.

The absence of Dakalo “Akonkwo” Nemakonde in the TRON striking force was evident from the onset. The combination of Ndolivhuwa Nthambeleni and Rinaye Madzhuta at the forefront of TRON was not strong enough to shake the opposition defence.

Baraccah had their first scoring chance nine minutes into the game. Karel Mello received a neat pass from Lovers Moitsi just outside the box. Mello did the unexpected by shooting aimlessly from close range. The ball missed the target by inches.

The boys were separated from the men in the 24th minute. Rinaye Madzhuta tried his luck with a ground cutter from the 35-meter area. Mahlatse Mahlare, the Baraccah keeper, fumbled and suffered the pain of watching it go beyond his reach.

The visitors lost their original fighting spirit in the last half, making it easy for the TRON midfielders to invade their territory.

Thivhulawi Silima, who came on as a substitute, missed a clear chance in the 69th minute. He received a good pass from Maboho Nevari and shot straight to the stranded Baraccah keeper. The game came to a standstill for about six minutes as the medical team was attending to Khuliso Phosiwa’s injury. Phosiwa soon recuperated and continued with the game as if nothing had happened. 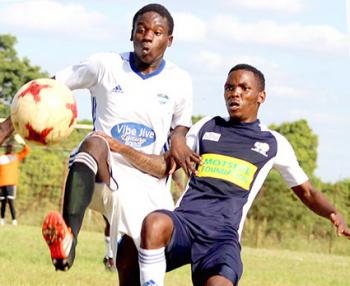 Khuliso Phosiwa of TRON in full flight, controlling the high ball while Harry Legodi of Barracah Valley intercepts from behind.