A fundraising golf day is going to be held to help with the travel expenses for Heidi-Lene Jonck, who, at the moment, has to travel to Pretoria every two weeks for surgery to keep her throat open. Cherise Botha, who is arranging the day, told the Zoutpansberger that the emphasis of the day was fun.

“It is not only to try and help to lighten the load that Heidi-Lene and her sister Elze-Marie du Preez are dealing with of having to travel to Pretoria every two weeks, but also to celebrate Heidi’s birthday,” said Cherise. “She spent her birthday last year in the intensive care unit.”

On 11 March last year, Heidi-Lene was involved in a boat accident on the Albasini Dam. She received a serious blow to the head that rendered her unconscious and led to her face being submerged for long enough for brain damage to occur. Following that, a breathing tube was left in her throat for weeks longer than it should have been, leading to a severe build-up of scar tissue in her throat, which almost caused her to suffocate last year. Heidi-Lene is now waiting for a life-saving operation that will remove the scarred portion of her oesophagus, but in the meantime, she has to have a temporary operation every two weeks to keep her airway open.

“It has been a long and hard year for both sisters,” said Cherise. Heidi-Lene is making progress with learning to walk again, and with relearning how to read and write and is staying positive about her future. The Soutpansberg Golf Club is hosting the fundraising and fun day on 22 March. It will only be nine holes played in the afternoon, followed by a braai and prizegiving, which is all included in the price of R1 000 for a four-ball alliance.

“Everyone is welcome, though,” said Cherise. “Anyone can join in and family members not playing golf can join the braai for a fee of R65 per person. Just come for the day, and to spend time with Heidi to celebrate her birthday. Businesses are invited to put up gazebos and advertise their products or services for a little sponsorship on the day. Fees and donations can be paid into the golf club’s account, using the reference ‘Heidi’s Golf Day” and their name or send proof of payment to 082 818 2315. Payments can be made into Standard Bank account number 331660806 in the name of the Soutpansberg Golf Club, branch code 051001. For more information, phone Cherise at 082 818 2315. 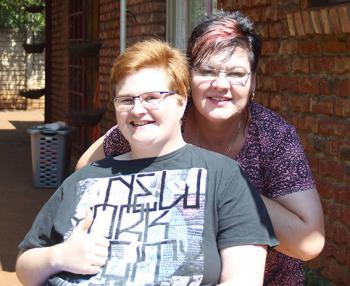 Heidi-Lene Jonck with her sister, Elze-Marie du Preez, are looking forward to celebrating Heidi's birthday this year at the fundraising golf and fun day being held by the Soutpansberg Golf Club on 22 March.