The strength of the crocodile is in the water, so the saying goes. The coach of Black Leopards, Mr Dylan Kerr, believes that the saying is more relevant to his team.

Kerr said that teams playing against Black Leopards at the Thohoyandou Stadium must not expect a walk in the park. He cited their 3-2 victory over Chippa United last Sunday as the best example.

Although Lidoda Duvha were trailing 0-2 at one stage, they did not throw in the towel. They continued to fight as a collective unit and finally scored three beautiful goals to ensure that the Eastern Cape side went back home with empty hands.

Kerr further stated that the fans should expect that kind of fighting spirit from the team in their future games, especially at home. He appealed to the team’s fans not to over-celebrate their victory against Chippa, saying it was still too early to believe that the team was out of the relegation zone. He reminded the fans of the fact that three of their four remaining home matches will be very tough.

Lidoda Duvha will play at home will be against Kaizer Chiefs, Mamelodi Sundowns and Cape Town City.

According to Kerr the fact that their next league match will be played in two weeks’ time is a blessing in disguise to them as they will get enough time to prepare for their away match against Orlando Pirates that will be played at the Orlando Stadium on Friday, 29 March.

He added that their two key players, Ivan Mahangwahaya, and the keeper, Rotshidzwa Muleka, will have fully recovered from their injuries when they face the Buccaneers.

Apart from Muleka and Mahangwahaya, the team’s all-rounder, Khuliso Mudau, will also be available for selection in their game against Pirates. Mudau was out of action for two matches because of suspension.

Thabo Rakhale and Lerato Manzini scored for Chippa United on Sunday, but Mwape Musonda silenced them with a hat trick.

Leopards are now in the 12th position on the log with 25 points. They are the only side who have played 22 matches to date, while the rest have played 23. 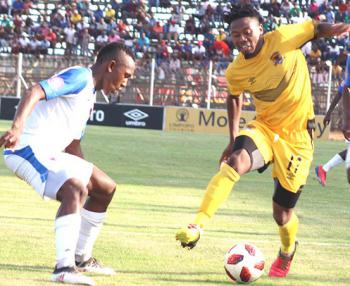 Lifa Hlongwani of Leopards hooks the ball, while Boikanyo Komane of Chippa is focused on it.