Who is Mwape Musonda?

After scoring a hat trick when his side, Black Leopards, beat Chippa United 3-2 in their Absa Premiership League game at the Thohoyandou Stadium last Sunday, a common question that remains unanswered to many a soccer fanatic is, who is Mwape Musonda?

Lidoda Duvha came back from a 0-2 deficit to emerge as the victors at the end of the game.

The 28-year-old striker was born in Lusaka, Zambia, on 8 November 1990. He played for several Zambian amateur teams before joining a local professional side, Zanaco FC, in January 2013. A scout from Orlando Pirates was impressed by his performance at Zanaco FC and he was later invited for trials in Johannesburg.

On 3 February 2015, Musonda signed a three-year contract with Orlando Pirates. He moved to Lamontville Golden Arrows on loan from the Buccaneers five months later. He stayed there for a full season.

When his contract with Orlando Pirates expired at the end of the 2015/16 soccer season, Black Leopards saw it as a blessing. He joined the Thohoyandou side on 30 August 2016. He was instrumental when Black Leopards finished in the second spot on the log at the end of the 2016/17 soccer season. The team participated in the promotional play-offs, but they could not make the grade as they drew 1-1 in their deciding game against Baroka FC at the Thohoyandou Stadium.

Musonda is the league’s top goal scorer at present. The hat trick he scored against Chippa United brings the total number of league goals he scored to date to 12.  Apart from the 12 league goals, Musonda scored 2 goals in the Nedbank Cup competition.

The bulldozer striker was named the league’s best player for the month of December 2018.

Asked how it felt to be the league’s top goal scorer now, the soft-spoken sharpshooter said his target was to score 20 goals this season. With eight league matches remaining before the end of the season, Musonda believes that his set target is still achievable. 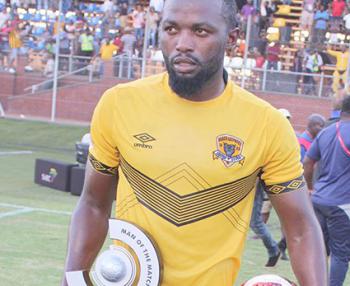