Displaying very uncharacteristic behaviour, Black Leopards’ goalkeeper, King Ndlovu, caused a scene towards the end of their embarrassing 1-2 defeat to Maritzburg United at the Thohoyandou Stadium on Saturday afternoon.

Lidoda Duvha won a free kick on the edge of the 18-meter area in the dying minutes of the match while trailing by 2-1. Midfielder Lifa Hlongwane stood up to take what looked like a lifeline for the home side to score an equaliser, with only a few minutes remaining on the clock.

Ndlovu then sprinted from his goalposts and demanded to take the free kick himself. The league’s top goal scorer, Mwape Musonda did not take kindly to Ndlovu’s behaviour and the two had to be separated by teammates after they started pushing each other.

Ndlovu ended up taking the free kick and missed.

Leopards coach Dylan Kerr was left fuming after the embarrassing incident. “No, it’s shocking; I cannot believe it. The players were completely right to pull him back, but next time they’ve got to knock him out. He has no right to do that. He has not done one at training, he has not even practiced one. I told him after the game, but he sees it differently. I have never ever seen that in a professional league.”

Kerr also expressed his dismay that the goalkeeper told him to “f**k off” when he tried to stop him from taking the free kick. “Look, I don’t mind the anger and that craziness in football, but you can’t tell the coach to f**k off.” He added that, whether he was right or wrong, “I am the boss, I am the coach”.

At the time of our going to press, no one was certain if any disciplinary measures would be taken against Ndlovu. 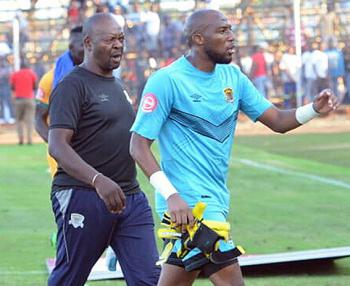