The joy at the Thohoyandou Stadium after Tshakhuma Tsha Madzivhandila (TTM) beat Richards Bay FC 2-0 in their National First Division League match on Sunday could not have been greater than if they had won a cup final.

The victory means that TTM secured a place in the promotional playoffs that are scheduled to kick off next Wednesday, 15 May.

The team that will be on top of the log at the end of the promotional playoffs will also be promoted to the Premiership Division. TTM will play their first promotional playoffs match away from home. They will undertake a journey to Pietermaritzburg, where they will lock horns with Royal Eagles at the Harry Gwala Stadium next Wednesday. They will wrap up their programme by paying a visit to the Absa Premiership Division side on Saturday, 1 June.

Meanwhile, the marketing manager of TTM, Mr Livhuwani Madzuhe, said that they had arranged transport for the fans to Pietermaritzburg next Wednesday. The transport fee is R200. Fans interested in joining the bus can phone Madzuhe on 071 672 9034 for more information. 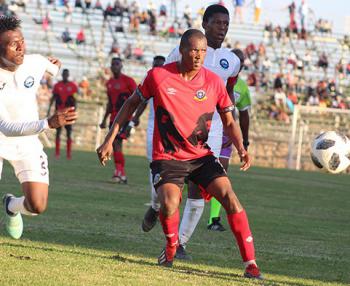 Phumelele Bhengu of TTM (right) and Simphiwe Mcineka of Bay are focused on the outgoing ball.