Fundudzi United Brothers secured a place in the final of the MTG KO competition by beating Mukula Young Brothers 5-3 in their semi-final match at the Makonde Home Defenders grounds on Sunday.

The game was evenly contested, with the teams creating and squandering their scoring chances.

Young Brothers were the first to knock on the opposition's door. Their overlapping midfielder, Dakalo Masithi, was the first to cause an upset. He received a neat pass from Ndindedzo Rasalanavho and unleashed aimlessly from close range. The ball missed the target by inches, much to the fans’ disappointment.

As if that was not good enough to annoy the fans, Mpho Musehane committed a similar blunder moments later. He received a beautiful pass from Livhuwani Ndou and tried his luck with a half volley from the 20-meter area. Musehane suffered the pain of watching the ball go astray.

The game turned lukewarm in the last 10 minutes as the teams played defensive football. The score line was 1-1 at the end of the regulation time and the winner was determined through a penalty shootout. 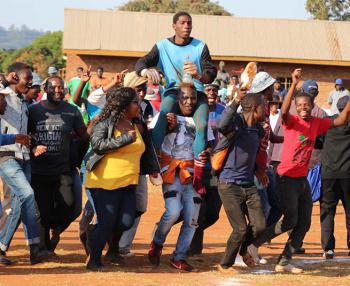 The fans and officials of United Brothers lift the team’s keeper, David Khakhu, as they celebrate the team’s victory. Khakhu saved two penalties in the game.

Thompho Phaswana of United Brothers (left) and Mpho Musehane of Young Brothers have lost sight of the high ball.