In their Sasol Women’s Soccer League match at the Tshifudi Stadium last Saturday, Samba Girls rose to the occasion and held Chippas United Ladies to a 1-1 draw.

Samba Girls made their intentions clear from the onset. Their strikers, Shumani Muleka and Mpho Nemathaga, gave the opposition defenders no time to breathe in the first 20 minutes of the game. The Girls’ vastly experienced midfielder, Murembiwa “Mdu” Mugivhi realized that it was not her day in the 10th minute. She received a neat pass from Dolly Mnisi just outside the box from where she unleashed a powerful half volley. Although the keeper of Chippas was already beaten, Mugivhi’s attempt went a little wide.

The Girls’ original fighting spirit faded with time, thus giving Chippas chance to regroup from behind. Chippas took the lead in the 27th minute. Their slender striker, Mbulaheni Mathonsi, received a beautiful pass from Kholani Mukhuwana and beat two Girls’ defenders before unleashing a half volley that was too hot for the keeper to handle.

Realizing that their bulldozer striker, Makwena “China” Mashalane, was out of form, the Chippas’ coach replaced her with Surprise Mphigalale. The referee, Ms Vhahangwele Nembaleni, flashed the first yellow card in the 39th minute. Doris Mnisi obstructed Kholani Mukhuwana in the Girls’ danger area and Nembaleni was lenient enough not to let her see red.

Chippas effected another change to their starting 11 by replacing their keeper, Mukhethwa Maemu, with Nkhensani Koma. The move was not good enough to stop Samba Girls from scoring the equalizer in the 76th minute. Madembe Tshikumbu, the Girls’ captain, scored from the free kick with a volley. Kholani Mukhuwana of Chippas was also reprimanded with a card for dangerous play late in the game. 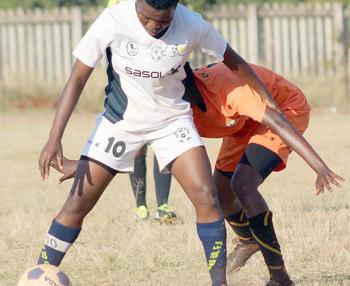