The Total group is partnering with 32 schools across the country to ignite football talent and nurture the soccer culture.

According to Mr Pierre-Yves Sachet, Total South Africa’s CEO and managing director, the total group is a proud sponsor of the Confederation of African Football (CAF) and the title sponsor for the Total Africa Cup of Nations 2019 in Egypt, which will kick-off on Friday, June 21.

He said that Total had signed a partnership agreement with CAF in 2016, becoming the official title sponsor of African football for eight years. Total became the title sponsor of 10 competitions - three inter-club and seven nationals. The partnership started in 2017 in Gabon with the prestigious Africa Cup of Nations, which was renamed the Total Africa Cup of Nations.

He said that according to this new concept, the school games would make provision for 14 boys and 14 girls in each grade to play a soccer game to stand a chance to be selected as the top boy and girl player of their grade. The top players will then participate in skills-based soccer activities for a talent scout to select the best players from each school. The winners of each school will be part of a lucky draw to win tickets to attend one of the Bafana Bafana games in Egypt.

He addressed issues such as running a grassroots programme, scouting for talent, the training of elite squads and maximising the use of equipment and facilities. “Coaches were tasked with rolling out a variety of football development- and life-skills initiatives. The coaches’ first objective will be to develop squads for both boys and girls," says Sachet.

“The petrol company’s investment into the sports facilities aligns with the national agenda of developing school sport across all the provinces with the aim of integrating it into the school learning system. Such initiatives also create platforms for football development and talent identification for our youth. This new infrastructure stands as a symbol of development in most disadvantaged communities,” continued Sachet.

The acting principal of Soutpansberg Primary School, Mr Muravha Nyambeni, said that the sporting development of the youth was a continual battle, with so many other societal pressures influencing South African youngsters. "With the support of sponsors such as Total, we are able to take greater steps in the right direction and offer our up-and-coming sportsmen and women not only the support they need on the pitch, but also the guidance and mentorship in other aspects of their lives," he said.

A young local coach who helps pupils, Mr Gwasda Nedzamba, described the Total group as “a selfless and caring company”. He said it was painful to see that most businesspeople were not ploughing back into the community. He said most of the soccer stars of yesterday were now penniless and some were even taking ordinary jobs after a life of glory.

“I have come to realize that a soccer career is very short and that many have hit hard times after being in the limelight and leading a life of glamour. With education, one is secure for life and has something to fall back on when days are dark on the soccer field,” he said. 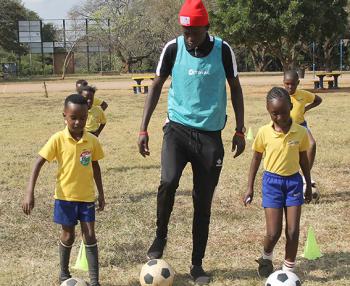