Dipeni FC gave Mulodi Young Santos a day to remember when they crushed them 7-1 in their MMK Administrators League match at the Sambandou Dipeni grounds on Saturday.

Dipeni or Vhanzheli as they are affectionately called, made their intentions clear from the start. It took them only two minutes to take the lead. Their top goal scorer, Rotondwa Mutsivhuli, blasted in a rocket, following a neat pass from Jerry Mpofu.

The visitors from Mulodi village committed a clearing error in the 14th minute. Manase Mutshayi intercepted a back pass and beat the keeper with a ground cutter. Young Santos realized that it was not their day when they missed a certain goal three minutes later. They were awarded a penalty after a defender of Dipeni handled within his own penalty area. Rotshidziwa Dzialwa, however, shoot straight to the stranded keeper.

The hosts were awarded a free kick in the 25-meter area 10 minutes before the half-time whistle. Jerry Mpofu scored with a half volley from the free kick to bring the half-time score to 3-0.

Santos were reduced to 10 men after Rotshidziwa Dzialwa was given his marching orders for dangerous play in the 59th minute. Athinashaka Ndou of Dipeni also saw red for obstruction.

The keeper of Santos mishandled the ball and Rotondwa Mutsivhuli, who was waiting nearby, scored an easy goal.

Young Santos’s solitary goal came via Tsireledzo Fhedzisani in the 74th minute. A player of Santos, Khumbelo Mudau, used abusive words towards the referee, Mr MK Mapasa, moments later and he was given his marching orders for that.

A substitute, Ronewa Munzhelele, and Jerry Mpofu scored Dipeni’s last two goals in the dying minutes of the game 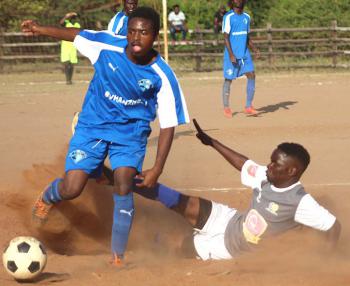