Honour for the founders of Leopards

Several former Sibasa Black Leopards players organized a thanksgiving function in honour of the founders of the club, Mr Zacharia Mathelemusa and the late Jessy Muthige.

Some former players of Sibasa Black Leopards, such as Tokyo Mukwevho, Nanana Masase, Pele Likhade, and Tshisamphiri Madima, among others, gathered at Mathelemusa's house in Sibasa Block A a fortnight ago to honour the two founders of the team.

One of the organisers of the event and a former player, Adv Nkhangweleni Ramugondo, said good things needed to be applauded. "We want to honour Mr Mathelemusa while he is still alive, and we also pay tribute to the late Mr Jessy Muthige. They were both soccer lovers and wanted to promote the sport in the entire former Venda.”

Former player Pele Likhade narrated that during the formation of the team they were transported to and from the match, getting food and soccer kits funded by the two legendary founders. "We used to get a good life from the two legends, who treated us like their own blood children. They also encourage us to take education seriously as they told us that soccer was the game for a short while," Likhade said.

In response, Mathelemusa said that he had never thought that one day he would be remembered for the effort they had made to promote soccer in the former Venda.

The guest speaker during the event, Mr Ronald Makhadi, said that for the two legends, soccer was never a money-making business, but it was played for recreational purposes only. 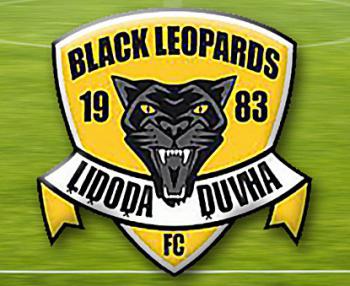 Seated second from right is Mr Zacharia Mathemusa, one of the founders of Sibasa Black Leopards, with some family members of the late Jessy Muthige, while some former players surround him.