Fans saw a feast of goals when Tshilonwe Young Bombers brutally walloped Belavhathu FC 6-2 in their semi-final match of the Boy Nemakonde KO competition at the Tshifudi Stadium on Saturday.

Belavhathu approached the game aggressively, but their original fighting spirit faded with time. One factor that lead to Belavhathu’s downfall was their failure to deal with the crosses from the Bombers’ wingers, Ronewa Mudau and Shadrack Mashaba.

Young Bombers took the lead in the ninth minute. Their centre forward, Douglas Zaba, was brought down within the penalty box, prompting the referee, Mr Mulalo Mubva, to award a penalty. Thonifhani Masikhwa blasted in a rocket from the white spot.

Bombers increased the lead in the 29th minute, when Mukandangalwo Nemutudi headed home, following a corner kick that was taken by Ronewa Mudau.

Belavhathu were reduced to 10 men nine minutes before the end of the first half. Their central defender, Hlaluko Matjelele, was given his marching orders after tackling Thonifhani Masikhwa from behind. The players then abandoned their positions and moved forward to add the numbers to the strikers. Their effort did not pass without a reward as they managed to pull one back in the 57th minute.

Matimba Vukea headed home after a corner kick that was taken by Moses Singo. Young Bombers increased the lead through Ronewa Mudau. He forced his way through the defence of Belavhathu and unleashed a rocket from inside the box.

Belavhathu’s second goal came via Hlonipho Matjelele. He blasted in a missile, following a scramble within the box. 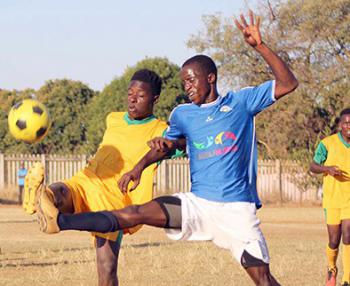