With only three weeks to go before the start of the Premier Soccer League’s activities for the new soccer season, Black Leopards are continuing to solidify their squad. Lidoda Duvha announced early this week that they had acquired the services of an acrobatic keeper, Jonas Asvendo Mendes, from Guinea Bissau.

Mendes was part of the squad of Guinea Bissau that recently participated in the African Cup of Nations.

According to the club’s chairman, Mr David Thidiela, after acquiring the services of four experienced players in the past weeks, they felt that it necessary for them to strengthen the team’s goalkeeping department. Leopards procured the services of Thabo Matlaba from Orlando Pirates, Thuso Phala (Supersport United), Mumuni Abubakar (Royal Eagles) and Mogakolodi Ngele (Mamelodi Sundowns) recently in a bid to beef up their ailing squad.

Mendes will compete with King Ndlovu and Rotshidzwa Muleka in the goalkeeping department.

Thidiela also revealed that the team and the technical staff will be paraded during a church service at the Vhufuli branch of the United African Apostolic Church on Sunday, 28 July. The service will be combined with Mr Thidiela’s 68th birthday celebration.

Thidiela further stated that the celebrations would start on Saturday, 27 July. Saturday’s programme is scheduled to commence with a youth service at 10:00. A choir competition will follow later in the afternoon. Twenty-one church choirs from around Vhembe are expected to battle it out in the competition.

The day’s programme will be followed by a night vigil (mulindelo). According to Thidiela, the purpose of the night vigil, commonly known as an all-night prayer, is to give thanks to God after the team narrowly survived the relegation axe last season. 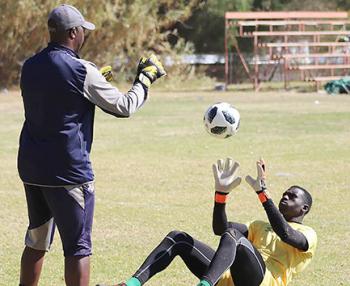 Keeper Jonas Asvendo Mendes goes through his paces on the training pitch. With him in the photo is the goalkeepers' coach, Mr Samuel Banda.