Juventus are the Masawe U/15 champions

Vondwe Juventus were crowned champions of the Masawe U/15 Soccer Tournament on Saturday. They beat Makhuvha up the Ants Junior 3-2 in the final at the Vhufuli Gooldville grounds.

Juventus received R2 000, a soccer kit, a floating trophy, gold medals, 15 soccer boots and a soccer ball during a ceremony held at the grounds shortly after the final.

Juventus’ way to the final went via Tshitereke Junior Citizens, whom they crushed 4-0 in their semi-final match at the same grounds earlier that day. The runners-up, Makhuvha up the Ants Junior, went home with R1 250, a soccer kit, silver medals, 15 soccer boots and a soccer ball.  Makhuvha up the Ants Junior beat Lavani Arsenal 8-7 in the semi-final to secure a place in the final.

The keeper of Juventus, Rinae Nevhufumba, received the award for the best goalkeeper, Faranani Nemathaga of Vondwe Juventus was the top goal scorer with 21 goals and the captain of Up the Ants, Orifha Makungo, was adjudged as the player of the tournament.

The sponsor, Mr Masala Ramaphosa of the Masawe Group of Companies, said that he was impressed by the way the tournament was run. He promised to sponsor the tournament in future, saying the sponsorship amount would increase with time. 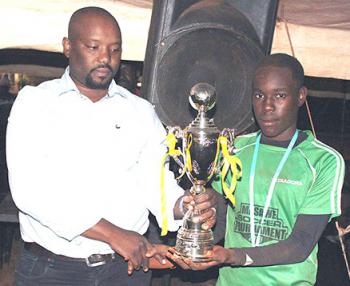 The best player in the tournament, Orifha Makungo, receives his trophy from Mr Masala Ramaphosa.