Battle of the Stars in Sasol League

With only two matches remaining before the end of the current season, the teams affiliated to the Limpopo Stream of the Sasol Women’s League will go about their business as usual this weekend.

After losing 0-3 to Maindis Ladies at the Ladanna grounds in Polokwane last Saturday, Shayandima Morning Stars are gearing up for a Vhembe derby against Tshandama Young Stars at the Shayandima School grounds tomorrow. Morning Stars must win the match at all cost in order to keep their title hopes alive.

The Stars from Shayandima were tied on 22 points with Maindis before last Saturday’s defeat against the log leaders, Maindis Ladies. The fact that Tshandama Young Stars are still to win a league match to date is reason enough for Morning Stars to believe that they will collect the maximum points without putting in much effort tomorrow.

Tshandama are lying at the bottom of the log with one point in hand. Young Stars lost 0-5 to Morning Stars in their first-round league match at the Tshandama grounds about four months ago.

Another Vhembe derby between Samba Girls and Chippas United Ladies will be played at the Tshirenzheni School grounds. Chippas must keep an eye on the Girls’ forwards, Madembe Tshikumbu, Murembiwa Mugivhi and Dolly Mnisi, or else their title hopes will be shattered. On the other hand, the Chippas’ playmakers, Maggie Mukhuwana and Edzani Ramaano, will cause havoc for the Girls’ defence if they are not tightly marked.

Real Mighty Girls will host Maindis Ladies at the Mabalane grounds outside Giyani. The other fixtures are: Sisters FC vs Botlokwa Ladies, Moria Sweepers vs Mandebele Happy Fighters, Re Tla Dira vs Kanatla Ladies, Seven Stars vs University of Limpopo and Skimzozo vs Fifty Stars Ladies. 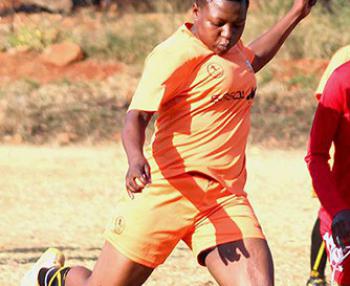