They lost 0-1 to Manamani City at the Manamani grounds on Saturday. They rectified their mistakes and walloped All Bullets FC 8-1 at the Maungani grounds the following day.

Although they were playing in front of their home crowd on Sunday, Bullets did not show any appetite for goals for the duration of the game. They looked relaxed, even at the time when the visitors from Khwekhwe village were three goals up.

Happy Boys took the lead in the sixth minute when Hazewell Mbombi blasted in a rocket from inside the box.

Happy Boys took 18 minutes to increase the tally. Their left winger, Khathutshelo Sibubuni, beat the keeper with a long-range ground cutter, following a neat pass from Hazewell Mbombi. Happy Boys were awarded a penalty in the 29th minute after Khathu Mabasa handled the ball within the box. Mbombi scored from the white spot to bring the half-time score to 3-0.

The referee, Mr Ntsieni Muuge, flashed three yellow cards within a short space of time. Munangiwa Mutshidzi and Masakona Mudau, both of Bullets, and Karabo Matloga of Happy Boys found themselves on the wrong side of the football laws and Muuge did not hesitate to reprimand them with cards.

Bullets were also awarded a penalty after the Boys’ keeper tackled Khathu Mabasa from behind within the box in the 59th minute. The Bullets’ solitary goal seemed to have been an insult to the Happy Boys’ strikers.

They then scored three beautiful goals within the space of 10 minutes. Wanga Mashige, Ndivhuwo Mawahsane and Riaurenda Mudau found the net in the 64th, 68th and 70th minute respectively. Bullets abandoned their positions and moved forward in search of goals. That gave Happy Boys a chance to score their last two goals via Talifhani Nesindande and Thabelo Nengwekhulu in the dying minutes of the game. 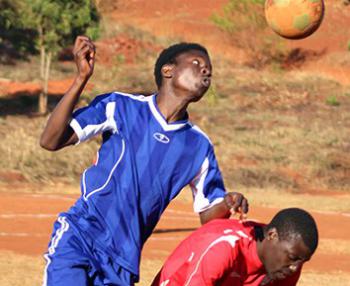 Riaurenda Mudau of Happy Boys pushes Masakona Mudau of Bullets down before heading the ball away.