The game was one of two halves as Makonde dictated terms for the better part of the first half, while the visitors from Tshidzivhe made a comeback in the last stanza.

The first half was characterized by wasted scoring opportunities. Although Makonde were all over the visitors, Potholes managed to keep a clean sheet until the end of the first half. Makonde threatened to score for the first time in the 18th minute. Their centre forward, Wavhudi Ndou, receiving a neat pass from Mpho Ravhutsi inside the box. Ndou did the unexpected when he unleashed aimlessly. The ball went far wide, much to the fans’ disappointment.

Potholes effected two changes to their starting line-up early in the last half. They replaced Mulweli Netshidzivhe and Ipfi Ratshilumela with Unarine Manala and Unarine Tshivhase respectively. The move was not good enough to stop the hosts from scoring their all-important goal. Their overlapping midfielder, Advice Munyai, caught the Potholes’ keeper, Gundo Netshidzivhe, napping with a long-range ground cutter.

The referee flashed the only yellow card in the 70th minute. Gudani Magadze of Makonde used abusive language towards the referee, and he was lucky not to see red. Potholes did everything within their power in their search for the equalizing goal, but the defenders for Makonde were too good to see any stranger to wander within their territory. 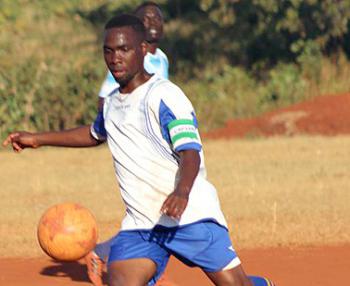