Berea FC came back from a 0-1 half time deficit to beat Gondeni Big Cat 6-5 in the final of the Makuya Soccer Tournament at the Makuya Try Again grounds on Saturday.

Although the game was evenly contested in the first half, Big Cat had more shots at goal than the visitors from Zwigodini. Jerry Mpofu, the Cat’s centre forward, came close to scoring in the eighth minute. He went loose from the right corner and tried his luck with a half volley from the edge of the box. Tshifhiwa Rasivhaga, the Berea keeper, made his presence felt when he braved the shot and palmed the ball away for a corner kick.

The only time Berea came close to scoring in the first half was in the 24th minute. Their vastly experienced striker, Edwin Ramphabana, received a neat pass from Dzivhuluwani Simba and lost possession before he could unleash from inside the box.

Big Cat finally put a smile on the fans’ faces five minutes before the end of the first half. A clearing mistake by a defender of Berea, Aubrey Ndou, gave birth to the Cat’s goal. Ndou miskicked the ball in the 25-meter area and Jerry Mpofu capitalized on the mistake and beat the keeper.

Lindelani Nephalama of Big Cat was booked for obstructing Tshifhiwa Makhado in the 64th minute. Berea fought back in the 78th minute. Their captain, Dakalo Ratshitanga, headed home after a scramble within the box. The score was 1-1 when the regulation time came to an end. 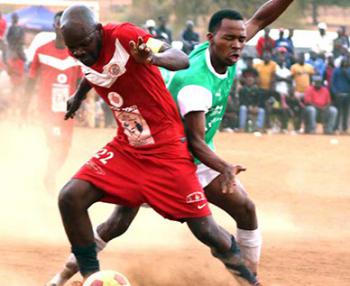