Magau United emerged as the new champions of the Mabena Soccer tournament when they beat the evergreen Mpheni Home Defenders 5-4 in the final match at the Mashamba grounds on Saturday.

The two teams played to a goalless draw before they went into a penalty shoot-out.

The coach of United, Mr Bishop Musiamo, said that he was happy with the way the team was gelling during the games. “The boys were doing their best and we have a good understanding,” he said.

Musiamo stated that they had a squad that had all the ingredients for winning the league this season. “I’ve told my boys that we can perform well this season, if we only focus and give our best. We are ready for the league activities now. By winning this season’s league, we will not only make ourselves proud, but the community and area as well,” said Musiamo.

The organiser, Ms Mercy Rambau, praised the sponsors for their decision to sponsor local football. "I'm very proud that we have grown young people of real quality," she said. 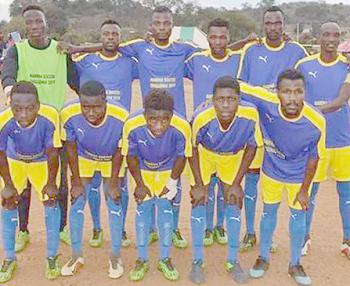 Magau United, the new champions of the Mabena tournament.