Mukula Jamaican Stars suffered a 0-5 drubbing at the hands of Rambuda Young Fighters in their opening match of the Tshikosi Soccer Tournament at the Makonde Home Defenders grounds on Sunday.

The Stars from Mukula village managed to match Fighters pound for pound in the first 15 minutes of the game, but their stamina vanished with time. They realized that it was not their day when they squandered two clear chances in quick succession.

In the first instance, Bornwise Baloyi shot wide from inside the box. A few minutes later, Tenda Nemavhola hesitated for far too long to unleash and ultimately lost possession.

That was a wake-up call to Young Fighters. They opened their account in the 24th minute. Mutshidzi Randima, their overlapping defender, forced his way through the defence of Stars and hit the back of the net from the edge of the box. Azwihangwisi Msesnyane, the Stars’ keeper, watched helplessly as the ball went beyond his reach.

Gundo Munzhelele scored with a half volley three minutes before the half-time whistle. The Stars introduced two new faces in the last half. Nyandano Makhuvha and Muavhi Makhera came on for Matodzi Nemudzivhadi and Thanyani Bohwana respectively. That did not stop Fighters from increasing the margin.

Mutshidzi Randima completed his brace with a half volley in the 67th minute. The Stars abandoned their positions and moved forward in search for goals. That gave Fighters a good chance to score the fifth via Phumudzo Netshitomboni late in the game. 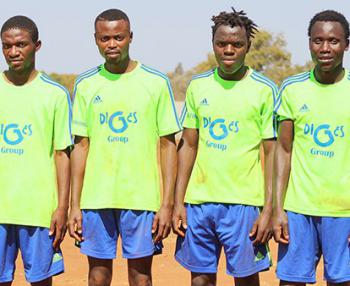