Elderly people should keep on exercising to stay healthy, said Cllr Rose Mathukha of the Vhembe District Municipality (VDM). She was addressing elderly people during the golden games, which took place at the Louis Trichardt High School last Wednesday.

According to Mathukha, physical fitness is a reliable solution for maintaining a healthy mind, weight control and for staying strong and flexible always.

One of the participants during the games, Ms Gladwell Mayimele (67) of Nkuzana village in Collins Chabane Local Municipality, who lost her leg in a vehicle accident some 10 years ago, said that since she started participating in the games, she had stopped taking medication for hypertension and diabetes.

The best athletes will proceed to the provincial games at the Old Peter Mokaba Stadium in Polokwane on 12 and 13 September. The winners during the provincial event will later participate in the national event. 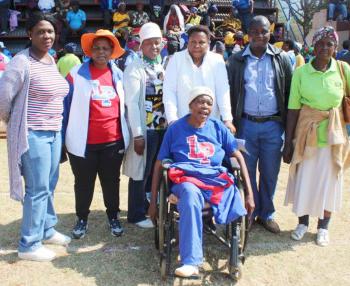 Cllr Rose Mathukha pushes the wheelchair of Ms Gladwell Mayimele while other councillors look on.