Tshivhazwaulu Newcastle’s goalkeeper, Cyril Ramatswi, was the toast of the evening as he was given the Player of the Year award during the club's awards ceremony, which recently took place at the Nandoni Dam.

He received R500, a medal and a floating trophy. Ramatswi said that winning a personal award waas lovely. "I would like to thank my teammates for a wonderful performance throughout the season. I won this award because of them. We should repeat this kind of performance next season," he said.

Other winners on the night were: Mpho Khadziandi, best defender of the year, Tsiwi Mulungwa, top goal scorer of the year, and Phumudzo Mulaudzi, player of the month (June). They received cash prizes and medals.

The chairman of the team, Mr Stanley Sadiki, said the awards aimed to recognize best-performing players and community builders. “The awards serve as motivation for the players to keep up the good work. I'm proud of these players and we plan to host these awards annually. We need these young players to focus on their careers in order to become future stars," Sadiki said. 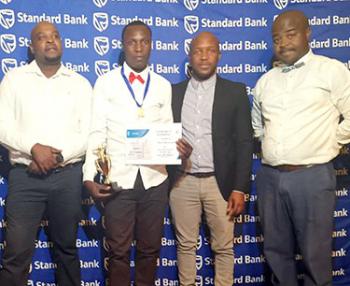