The girls of Ravele Netball Club won the top prize during the regional netball matches (municipal level) that were played under the auspices of the Makhado Netball Association at the Tshikota netball grounds two weeks ago.

The matches were for the U/15s and were sponsored by the Collins Sebola Group. Meanwhile, Ravele beat Mukondeni Twinkle Stars Netball Club 11-5 in the final and both teams were promoted to the district level.

“We are very happy for being winners and for being recognised for our efforts,” said Ravele Netball Club's coach, Mpho Lishivha. “We take our games very seriously and it pleases the girls to be recognised and appreciated for the kind of good work that they laboured so hard to achieve.”

The games were supported by the Limpopo Department of Sport, Art and Culture, and the Limpopo Academy of Sports (Vhembe District), and Mamu Community Development.

The district's acting deputy director within the Limpopo Department of Sport, Art and Culture, Ms Vhonani Ravhugoni, applauded the skills and determination the teams demonstrated during the matches. “You are stars and we really appreciate your efforts,” she said. “You showed us that we didn't travel long distances and come here for nothing. We enjoyed watching you play and the battle for the ball on the court.”

Mr Collins Sebola said that the company had a social responsibility to support community-based initiatives without expecting any gain, if not the contentment that they were adding value to the lives of youths. “If the youths are happy, then it makes us happy as well,” Sebola said.

Four netball teams – Tshino (Luvuvhu stream winners), Mabirimisa Powerline (Nzhelele region winners), Ravele (Soutpansberg region winners) and Mukondeni Twinkle Stars (Waterval region winners) – had participated in the matches and were given a netball kit each. However, Ravele, as winners, received an extra kit and a trophy. All in all, the Collins Sebola Group had donated five netball kits, 16 balls, 12 whistles, 8 nets, a trophy, transport for all four netball teams and catering for the supporters. 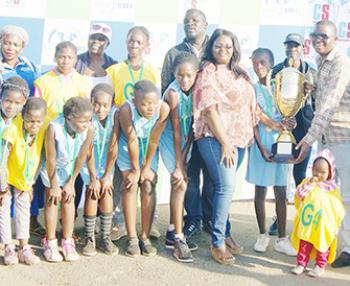