The sponsor, Mr Patrick Mudau, director of LTT Murunwa TVET College, said that the sponsorship of R60 000 clearly indicated that his college wanted to serve the community and develop sports in the area. "We are part of this community and we are doing this to support the local people," he said.

The coordinator of Makhado LFA in Soutpansberg region, Mr Mpfariseni Musekwa, said that identifying sport stars at grassroots level was important. He applauded the sponsor for helping to identify the talent in the region.

According to him, seeing that many businesspeople kept all their profit for themselves, without thinking of ploughing anything back into the community, was painful.

The teams ending from fifth to eighth position will receive R9 000 each. 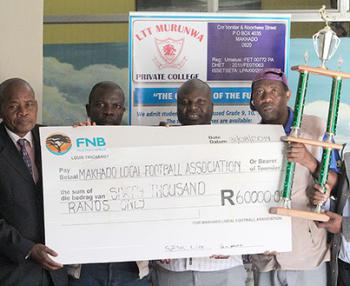